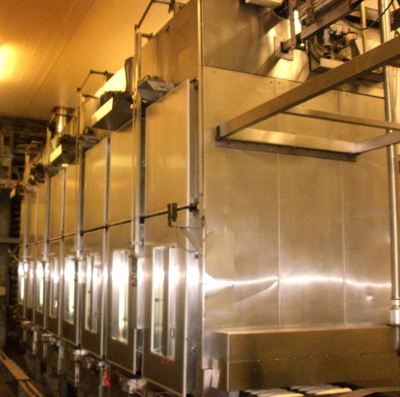 SKF high temperature bearings have enabled Evron Foods to extend maintenance intervals in their ovens from three months to almost three years – and counting.  The upgrade is one of the many application-specific solutions provided every day by SKF, the knowledge engineering company, that cut costs and maximise plant performance in applications across industry.

Evron Foods specialises in the manufacture of bakery products for retail, wholesale and beyond, both on behalf of private labels and under its own Easibake brand.  The company operates from two sites, one based in Northern Ireland and the other in Wales.

The efficient daily repetition of this process therefore depends greatly on the use of efficient, resilient bearings but until SKF became involved Evron were growing increasingly unhappy with the bearings that were installed.  These bearings were simply unable to cope with the high temperatures of the ovens and required replacement at a rate of approximately once every three months.  This caused Evron a series of problems, the greatest of which was the frequency of downtime and the loss of production.

Evron’s chief engineer Stephen Delacour called specialist engineering distributor Brammer to ask for help and Billy Hennessey, Brammer Regional Sales Executive for Belfast, called Michael Stewart-Lord at SKF to arrange a site visit.  While meeting with Stephen and discussing the situation, Billy was able to open up the Brammer Bearing Sample Case he had brought along and present to the chief engineer an SKF bearing that could solve the problem.  Michael then made the necessary calculations to arrive at the precise specification for Evron: SKF high temperature bearing 6202-2Z/VA228.  These bearings are fitted with a graphite cage that releases minute amounts of graphite powder to lubricate the bearing, offering an excellent dry lubricant option for low-speed, high temperature applications such as ovens.

The first bearings were installed at the Northern Ireland site in May 2009 and proved to be an instant success, easily exceeding the three-month maintenance interval demanded by the previous bearings.  Naturally enough, subsequent orders were then made for Brammer to provide SKF high temperature bearings for Evron’s Welsh site.

At the time of writing, the bearings originally installed in Northern Ireland during May 2009 are still in operation, having effected a 1000% improvement on the previous bearings.

“Downtime was a major problem for Evron because it was taking a whole day to change the bearings,” Billy Hennessey said.  “If the SKF solution had delivered even a six-month lifespan, Evron would have been happy because it would have doubled maintenance intervals.  As it is, the SKF high temperature bearings have so far saved ten days of downtime, nine replacement sets of bearings, and extended maintenance intervals from three months to almost three years.”

This press information was written and distributed by 4CM. For further copies, colour separation requests, images or other details on SKF Corporate please contact us on 01296 660080 or email: info.skfcorporate@4cm.co.uk. 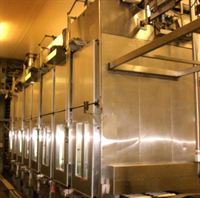