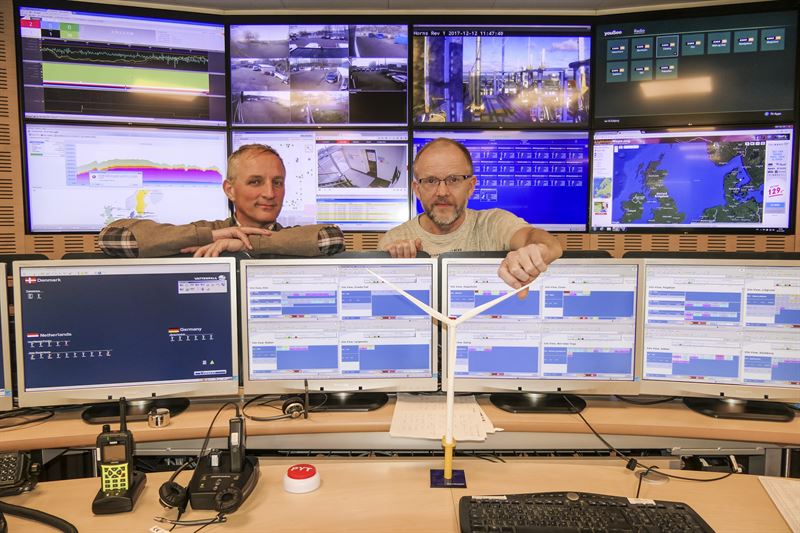 SKF has developed a new range of premium quality SKF Explorer bearings for wind turbine main shafts. One of these new bearings is being tested at a Vattenfall wind park in Denmark, helping the company to get as close as possible to trouble-free operations.

Gothenburg, Sweden, 28 June 2018: Vattenfall is one of Europe’s largest retailers and producers of electricity and heat with net sales in 2017 of 13.3 billion euros and some 20,000 employees. The company, which is owned by the Swedish state, and dates back to the days of damming big Swedish rivers, operates more than 1,300 wind turbines with a total capacity of 2,200 MW across Germany, the Netherlands, the U.K., Denmark, Sweden and Finland. A stated company goal is to work towards a fossil-free fuel world. In Denmark, Vattenfall is one of the key players in the wind power industry.

“This is also a growing business for SKF”, says Peter Scheibner, country manager, renewable energy, at SKF Denmark. “Wind turbine manufacturers and utilities such as Vattenfall all want the same thing - trouble-free operations for as long as possible, which is about 25 years or more.”

SKF has traditionally been an important bearing, lubricant and system supplier for on-shore wind turbines. But the real growth area is in the offshore sector where SKF has a growing presence.

“Bigger turbines, gearboxes, generators and heavier loads place new demands on bearing systems and this is something we are very experienced with,” says Scheibner.

“For this reason, we are collaborating very closely with Vattenfall on a number of key offshore wind projects.”

According to Scheibner, standard catalogue spherical roller bearings used in wind turbine main shafts have a good and proven track record, with some lasting up to 20 years, given proper service intervals. But there are limits.

In collaboration with wind turbine manufacturers, SKF has closely analyzed the technical features of offshore wind applications and developed a new range of spherical roller bearings for wind applications. One of these new bearings has been in operation in Denmark since February 2016, on a land-based turbine at the Tjæreborg Enge wind park situated 10 kilometres south of Esbjerg. SKF and Vattenfall are closely following the performance of this bearing from the SKF monitoring centre and the Vattenfall monitoring centre in Esbjerg. This is the heart of the maintenance operation in Esbjerg. A bank of monitors can, at the click of a mouse, show the running condition of wind parks in detail, down to a single turbine. It is a complex task where early prediction is essential in order to bundle upcoming interventions for main components.

To keep track of on- and offshore turbines, Vattenfall in Esbjerg uses SCADA (Supervisory Control and Data Acquisition), and CMS (Condition monitoring systems) online systems that monitors actual production, wind speed, wind direction, gearbox lubrication, oil temperature and pressure and generator cooling-water temperature and pressure. These data can indicate changes in the running conditions of these components and can be used to predict time to failure.

The solution involved a redesign and optimization of the SKF spherical roller bearing internal geometry.  A novel design process has been developed in this work, that iteratively modifies the internal geometry, simulates the performance of thousands of feasible internal geometries of the bearing to finally find the optimal design for the bearing to better accommodate the application loads. As a consequence, the cage is also redesigned both in terms of geometry and material, as the brass material was replaced by cast iron, which is stiffer and harder than brass.

Several internal metal sliding contacts were eliminated to reduce friction and wear. In addition, with the reduced contact pressures, the calculated bearing life was extended by an average of 60 percent. Furthermore, the weight of these new bearings was reduced by 4 percent on average, and the lubrication features were improved.

As is often the case, SKF stepped up its problem-solving resources as an investment in customer relations with Vattenfall. The goal was 100 percent availability throughout the 25-year design life of the turbine.

“If you want long-term improvements you have to participate short-term in the testing of our bearings,” Scheibner says. “This kind of cooperation with Vattenfall is vital for us to run tests and equally important for Vattenfall.”

Lars Buhrkall, manager of Vattenfall’s onshore wind park operations in Esbjerg, adds, “It’s a win-win where SKF helps us with their resources, and we come as close as possible to trouble-free operation.”

The SKF 240/710 BC spherical roller bearing being developed for both the on and offshore wind turbine market is a new standard of excellence in both bearing performance and precision manufacturing. Among the benefits are low speeds, high thrust capability, and an improved internal geometry, the soft brass has been replaced by a cast iron and much harder cage. This important design change has proven to cut down on wear and to solve previous lubrication problems.

SKF is a leading global supplier of bearings, seals, mechatronics, lubrication systems, and services which include technical support, maintenance and reliability services, engineering consulting and training. SKF is represented in more than 130 countries and has around 17,000 distributor locations worldwide. Annual sales in 2017 were SEK 77 938 million and the number of employees was 45 678. www.skf.com