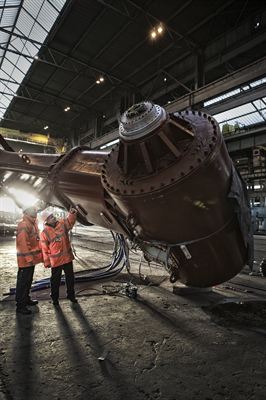 SKF's Scotland based Ocean Energy team has been on board with Scotrenewables Tidal Power Limited (Scotrenewables) from the very beginning, including collaboration in the design work on the company's very first small-scale hydrokinetic prototype. SKF divisional companies have since played an important role in the world-beating SR2000 turbine development project

SKF Ocean Energy has worked with Scotrenewables’ engineering team to supply a number of key components and holistic systems for the latter’s groundbreaking SR2000 tidal stream turbine, as well as providing a range of related engineering services. SKF has also made a commitment to support Scotrenewables through to full commercialisation of its innovative tidal power technology.

Scotrenewables was founded in 2002 to develop cost effective tidal and river hydrokinetic turbines. In just nine years, the company had successfully launched its small-scale tidal demonstrator SR250, capable of generating 250kW, followed by its full-scale 2MW prototype unit - the SR2000.

Launched in May 2016 from the Harland and Wolff shipyard in Belfast where it was constructed, Scotrenewables' 550 tonne SR2000 is the world's largest and most powerful floating tidal stream turbine. Designed to minimise the whole lifecycle cost of electricity production from tidal energy, this 2MW prototype generator features a flexible mooring system that enables installation at any water depth in excess of 25m, plus a range of anchoring systems to suit most seabed types.

While the SR2000 16 metre diameter rotors and dual 1MW power take off systems have been optimised for fast tidal current regions, such as those of Scotland, Northern France and Canada, the design can be readily adapted to suit local tidal conditions at sites with lower tidal speeds.

Scotrenewables reached the 2MW rated capacity of the SR2000 Mark I turbine in April 2017, setting a new tidal industry benchmark. During ongoing trials at the EMEC, this turbine has generated over 20MWh within  continuous 24hr testing periods - a performance level matching established offshore wind turbines. Lately it has achieved 116MWh in less than a week of continuous generation, providing nearly 7% of Orkney’s electricity demand, and more than 25% of that demand for short periods over the course of a full week.

Teams from SKF Marine and SKF Sealing Solutions have – in little under a year – provided a bearing and seal unit for the SR2000. SKF’s contribution included the design and optimisation of the main shaft assembly, procurement of sub-components, precision machining, professional seal and bearing assembly as well as on-site commissioning.

Michael Baumann, Business Development Manager, Marine and Ocean Energy at SKF commented: “This team effort enabled us to meet our customer’s expectations for reliability, robustness, ease of maintenance and parts replacement; it also helps us to achieve one of our own corporate goals - that of delivering sustainable energy at a competitive price.”

By pooling knowledge already gained from the marine, wind, oil and gas, and hydroelectric industries, SKF has developed a range of solutions for the wave and tidal energy sectors - a development effort that has gained considerably from long-term engineering project partnerships such as that between the SKF Ocean Energy and Scotrenewables teams.

Scotrenewables' CEO, Andrew Scott, pays tribute to the success of his company’s partnership with SKF: “It’s essential to the success of the tidal sector that we have buy-in from the major supply chain companies who have the right expertise to optimise their existing technologies for this new application - and stand behind that supply. It is a tremendous reassurance for Scotrenewables to have this commitment and relationship from a supplier of SKF’s standing as we work towards commercialising our product.

“The SR2000 has met, and in many instances exceeded, our expectations and, combined with the fact that this is the world’s most powerful operating tidal turbine, it means we’re making a material contribution to the generation mix in Orkney with just this single unit.”

Paul Wheelhouse, Scottish Government Minister for Business, Innovation and Energy, added: “I visited Orkney a year ago just as Scotrenewables was starting its test programme for the SR2000 turbine at EMEC. I am delighted to hear that the SR2000 has passed the seven day continuous generation test with flying colours and is exporting an impressive amount of power to the Orkney grid.”

The SR2000 project is supported by Scottish Enterprise’s WATERS II scheme, along with investments from Scotrenewables’ shareholders: ABB, DP Energy, Fred Olsen, Total and the Scottish Government (through its Renewable Energy Investment Fund).