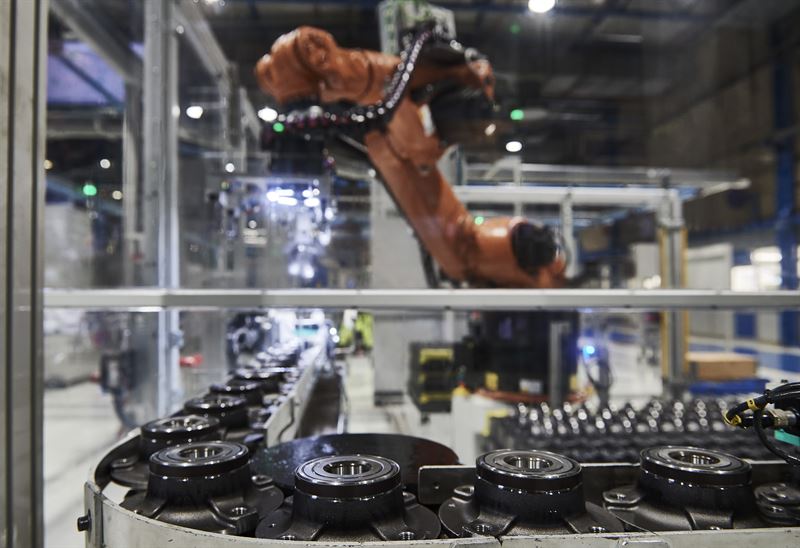 Gothenburg, 20 February 2020: SKF’s automotive bearing factory in Tudela, Spain, has become the Group’s second manufacturing site to achieve carbon neutral status. Together with the Steyr factory in Austria, which manufactures a range of bearings for industrial uses, the two factories have reduced their combined annual CO2 emissions by some 22,000 tonnes.

The reduction in CO2 emissions has been achieved by a combination of investments in process improvement, energy efficient machinery, solar panels and procurement of renewable electricity. At both Steyr and Tudela, approximately 500 tonnes of CO2 emissions per year from heating facilities are being compensated for by Gold Standard carbon offsets.

Bernd Stephan, President, Automotive and Aerospace, says: “The world does not face many more urgent issues than that of climate change and everything we can do to mitigate this is important. I believe the achievement of our teams in Tudela and Steyr are significant and something to be proud of. Investments have of course been made in this regard, but the main reason this has been achieved is the focus and commitment of our colleagues.”

Julian Jimenez Argudo, Tudela Factory Manager, says: “Being able to offer our customers products that have been manufactured in a carbon neutral factory sets us apart from the rest. Our achievements in Tudela are thanks to improvements in processes and investments in energy efficient machines and solar panels. A cultural change has also taken place, with everyone in the factory actively working to reduce their use of natural resources.”

SKF's climate objectives focus on reducing emissions across the entire value chain. With 2015 as the base year, SKF aims to reduce its CO2 emissions from manufacturing per tonne of sold bearings by 40% by 2025. As per the end of 2019, -36% has been achieved, putting the Group well ahead of this already ambitious target.

In addition to investments in energy efficient factories and solar panels, SKF currently sources roughly 50% of its total electricity consumption from renewable sources. SKF was one of the first companies to achieve certification to the ISO 50001 energy management standard on a global basis and is also working with suppliers to drive energy efficiency and reduced CO2 throughout the supply chain.

Facts, SKF Steyr factory:
Manufactures a range of bearings for industrial applications as well as being the Group’s center for bearing remanufacturing.
Total number of staff: 1 130
Proportion of green energy procured: 100%

SKF’s mission is to be the undisputed leader in the bearing business. SKF offers solutions around the rotating shaft, including bearings, seals, lubrication, condition monitoring and maintenance services. SKF is represented in more than 130 countries and has around 17,000 distributor locations worldwide. Annual sales in 2019 were SEK 86 013 million and the number of employees was 43,360. www.skf.com