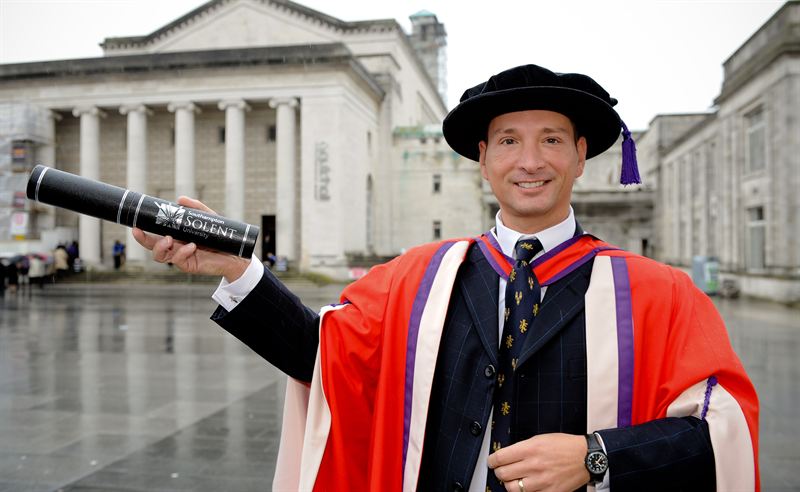 London born Barry Laden MBE FRSA, received an honorary degree of Doctor of Design from Southampton Solent University today in recognition of his outstanding contribution to the fashion industry.

Barry is highly supportive of Southampton Solent students, acting as a guest speaker, mentor and promoter of student employability through live business experience.

On receiving his award the graduation ceremony on 17 November, Barry Laden said:" I am so pleased to accept this honorary award from Southampton Solent University. There are many fashion courses across our universities but Southampton Solent has taken a unique approach that has resulted in a rare, excellent provision for students which places the University’s School of Fashion at the top of its field.”

Last month, after two years of successful trading, the University’s award-winning Re:So store moved to a larger, permanent space in The Marlands shopping centre in Southampton. It was officially opened by Barry who loved the new industrial chic styling as well as the addition of the creative learning zone on the upper floor.

Barry has a long association of providing retail space for small independent fashion designers. In 1999 The Laden Showroom opened in Brick Lane and now supports and sells for over 65 designers. They have access to coaching for developing international business on hand through fashion website ASOS.com. In 2012 he founded the East End’s first clothing factory to open for decades, East End Manufacturing, which was launched by London by Boris Johnson.

He was appointed a Member of the Order of the British Empire in the Queen’s New Year 2011 Honours List for services to the fashion industry.