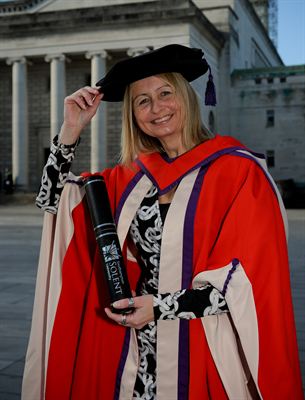 Francesca Berriman MBE received the honorary degree of Doctor of Technology today from Southampton Solent University in recognition of her outstanding contribution to Architectural Technology.

On receiving her award of Honorary Doctor of Technology at the graduation ceremony on Tuesday 18 November, Francesca Berriman said:  “The discipline of architectural technology has evolved into an established and respected career of choice, recognised for its importance, value and merit. For the discipline to be recognised in this way by Southampton Solent University is truly wonderful and a credit to all who have dedicated so much time and commitment over the years, both here at Southampton Solent University and within the Institute, thereby ensuring that the discipline is recognised by its peers.”

Chief Executive of the Chartered Institute of Architectural Technologists since 1995, Francesca was one of the first and youngest female Chief Executives within the built environment sector.

Throughout her career she has worked tirelessly and enthusiastically to promote the recognition of Architectural Technology and, in 2005, was part of the team which successfully led the Institute’s petition to receive its Royal Charter which permits full Members to become and use the protected title Chartered Architectural Technologists, MCIAT.

With a pedigree in Architectural Technology that spans more than twenty years, Francesca was also the first female Vice Chairman of the Construction Industry Council, the representative forum for professional bodies, research organisations and specialist business associations in the construction industry and, until recently, the Vice Chair of the Society for the Environment. Francesca currently sits on the Panel of judges for the Eurpean Women in Construction and Engineering Awards.

She also represents the discipline of Architectural Technology at government level – most recently to the Department of Works and Pension to drive for inclusive design to be incorporated as part of the education and professional competences requirements for built environment professionals, which has already been achieved within the Architectural Technology Subject Benchmark Statement 2015.

In The Queen’s Birthday Honours List 2012, Francesca was appointed Member of the Order of the British Empire for services to the Architectural Technology profession. 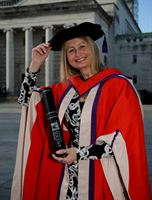