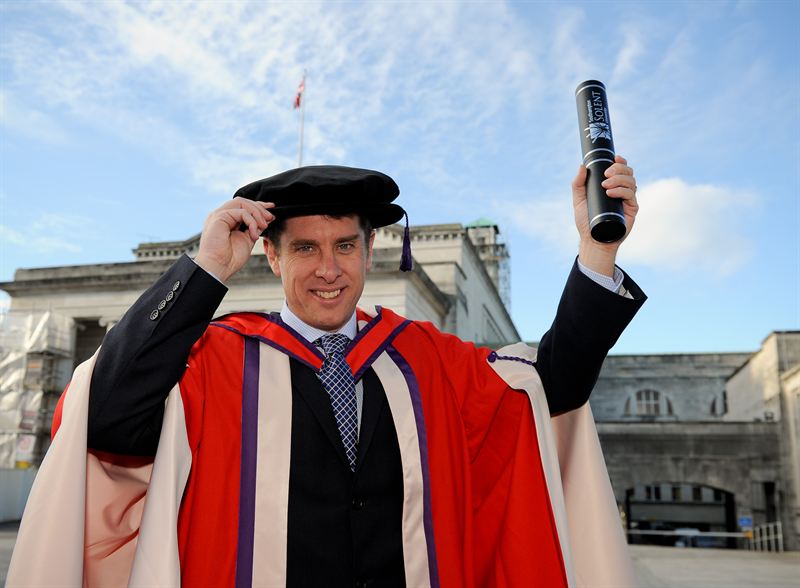 Dr Paul Hawkins OBE, the developer of Hawk-Eye sports adjudication technology, received an honorary degree of Doctor of Technology from Southampton Solent University today in recognition of his outstanding contribution to sporting technology.

Hampshire-born Paul is the founder of Hawk-Eye Innovations Ltd and responsible for the Hawk-Eye technology best known for its role in assisting sports adjudication in football, tennis and cricket. Starting from a PhD in Artificial Intelligence, he began the development of Hawk-Eye at Roke Manor Research, Romsey with funding from the Television Corporation.

On receiving his award of Honorary Doctor of Technology at the graduation ceremony on 18 November, Dr Paul Hawkins said: “Today is the day when the new chapter of many of your lives will start.  My advice to you is to follow your dreams.  I encourage you to find that thing you love and then pursue it wholeheartedly.”

Rapid developments in the technology extended its capability, being used at the Olympic Games (2008 and 2012); adjudication in snooker and golf and in wider sports coverage by broadcasters to assist in analysis and commentary. This year Hawk-Eye took responsibility for the complete television production of three outside courts at Wimbledon with each court consisting of three broadcast cameras automatically following the players. This enabled the entire TV production to be conducted with just one person covering each court.

Paul has taken the Hawk-Eye business from start-up to a multi award-winning £30 million business employing approximately 100 staff. He has personally led the technology, innovation and business growth and has become a highly successful entrepreneur.

Paul was appointed to the Order of the British Empire in The Queen’s Birthday Honours List 2014 in recognition of his work in sport and technology.