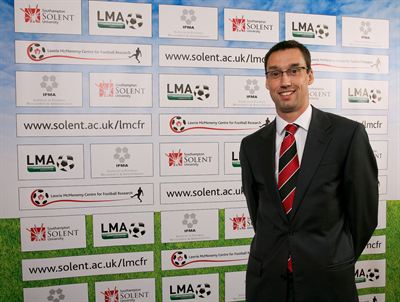 The director of Southampton Solent University’s internationally renowned football research centre met with members of the FA Commission to share his views on overseas player involvement and its effects on youth and national team development.

The commission, which has been formed to examine issues relating to the numbers of English players playing at the highest levels of club football, is calling on a range of experts as part of a knowledge gathering process.

Dr. Elliott, an expert in overseas player involvement, was asked about the research he has carried out in this field over the past decade.  He was also asked about youth development at English football clubs, another area that he has studied in recent years.

Solent is the official university partner of Southampton FC, a club which has an excellent record of developing talented young players - most recently Lallana, Shaw, Ward-Prowse, Clyne and Chambers. It has recently hit the headlines with former England captain Alan Shearer suggesting other English clubs should follow their lead.

Dr Elliott told the commission: “In order to develop the best players, you must surround them with players of similar or better ability. Clearly that has been the case at Southampton. When you couple that with clear pathways from academy to first-team football, you can produce the kind of team that Southampton is successfully fielding at the moment."

He praised the quality of the players coming up through Southampton FC’s academy, and suggested that the club’s practices over recent years could also have contributed to its success.

“By introducing academy talent into the first team when the club was competing in League 1 and the Championship, Saints gave its upcoming players the time and experience they needed to hone their skills in preparation for the Premiership.

"They have been given the opportunity to bed in and develop as the club has made its climb back up the divisions,” said Elliott.

Speaking after his meeting with the commission he said: "I'm really pleased to have been given the opportunity to share my views with the FA Commission. I hope that my work and that of the university’s Lawrie McMenemy Centre for Football Research will help them to better understand the complexities of the areas under discussion.”

The Lawrie McMenemy Centre for Football Research (LMCFR) is a multi-disciplinary football education, research and consultancy centre which provides expert support for the football industry, students and the media in a number of areas. The centre is founded on Southampton Solent University's position as a leading provider of football-related academic study in the United Kingdom.

Southampton Solent University offers more than 23,000 students over 200 qualifications ranging from HND to PhD, in subjects such as maritime education and training, fashion and design, media and television, music, health, sport and leisure, business, IT and technology. The university was awarded the 2013 Quality Assurance kitemark for quality and standards of teaching and learning.
Solent was voted one of the most creative universities in the UK in a Which? University 2013 poll of students. The university’s physiology laboratory has been officially awarded accreditation by the British Association of Sport and Exercise Sciences (BASES)Accreditation. 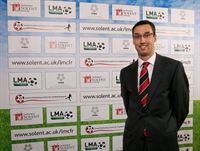