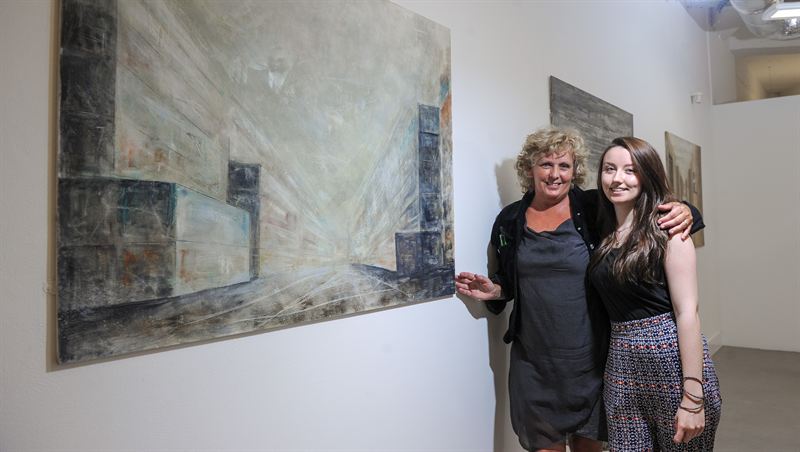 Final-year fine art students from Southampton Solent University have been treating visitors to a visual feast of colour, materials and thought provoking themes at ‘ascend’, this year’s end of year exhibition.

The show is the culmination of final-year BA (Hons) Fine Art students’ three years of study at the Southampton Solent School of Art. The innovative, imaginative and often personally inspired pieces provide something for everyone to appreciate - from a celebration of the French curve to age before beauty, and local urban landscapes to ‘Stir Crazy’ installations.

Speaking about the show Dr Atsuhide Ito, Senior Lecturer in Fine Art, says: “…it is evident that each artist has contemplated his or her personal history or social concern and confronted the theme with technical and intellectual integrity.” He goes on to invite the audience “…to listen to a variety of voices which vibrate the air and resonate onto the realm above the visible.”

When the youngest of her six children went to Secondary school, Wendy decided the time was right to pursue her long-held dream of becoming a professional artist and teacher. She has loved her time at Solent and it quickly became evident that age was not an issue, “the diversity of age, culture, nationality and personality all help to create a fantastic learning environment,” says Wendy. “Personally I have achieved so much more than I ever thought I could. Completing the course has prepared me academically for the career I always wanted and given me the confidence to progress. I have also made many new friends who will stay with me for life.”

One of Wendy’s daughter’s, Shannon, 20, has also been studying at Solent for the last two years. She feels that being at the same University as her daughter, who is on the BA (Hons) Media Culture and Production course, has brought them closer together. “We have understood when we have no time to see each other, been stressed about deadlines and we have been able to share our greatest achievements.”

Wendy will be going on to study for a Masters in October and gaining teaching qualifications and experience with the aim of combining work as a professional artist with teaching at higher education level.

Camilla Kristoffersen, 22, from Norway has based her project on the disappearance of Angalich Millard, a young girl who went missing from Manchester in 1998, only to be found dead in a remote cottage in Norway six years later. She was found along with a large amount of old photographs, letters, maps and items which she placed upon one of the walls and linked with red thread. “She was seemingly trying to make connections between the people in the photos, the places on the map and Thunder Theatre,” says Camilla, who will be staying on at Solent to study for a Masters in Visual Communication this autumn.