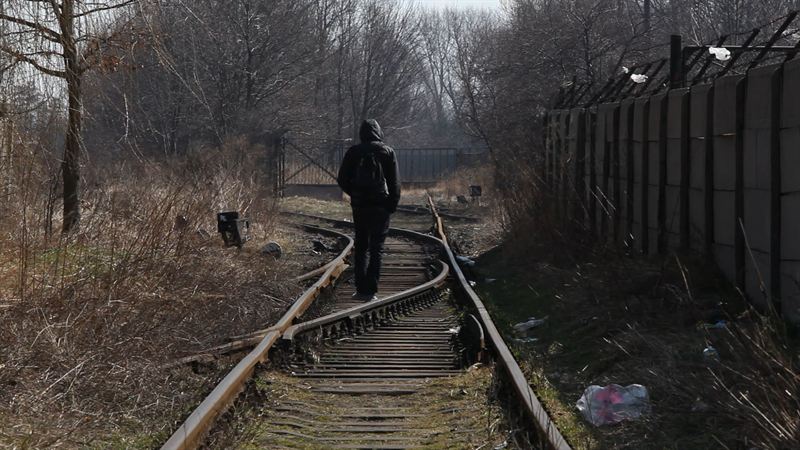 Julian, whose project is titled ‘A Polish Journey’, has been shortlisted for ‘Award for innovation in film – best film of the year’. Based on the Polish origins of his family, the online film and research project was supported by Solent University’s Innovation Fund.

“The idea of making a film that explored the Polish origins of my family through a road trip had been around for quite a few years,” says Julian.

“The project started to support the interactive units that I teach at Solent, and creating an interactive documentary from scratch has been extremely useful to draw on both as an example and inspiration.

“The aim was to create a piece with a strong connection between the form of the story and the content. Migration and borders seemed an ideal match for current trends in cross-platform storytelling, as the maps and geo-location have become a commonplace tool for interactivity.”

Initially with a single aim of developing expertise on the TV production courses in teaching and delivering interactive content, Julian’s project has since expanded into something wider, with a greater possible impact than planned.

“It’s important for researchers to be open to the possibilities of what might fortuitously evolve once a project starts,” adds Julian.

“It is great to be shortlisted by the AHRC as they represent some of the most significant research into arts in the academic context. The work involved a team of people who invested their skills and talents into the project and it is very positive to get this work seen by a wider audience. It was made on a shoestring with a lot of time and goodwill.”

Julian is currently working with academic and historian Bogusia J. Wojciechowska, who wrote Waiting to be heard: the Polish Christian experience under Nazi and Stalinist Oppression 1939-1955, to develop the text and written elements of the piece.

The AHRC awards are a central strand of the activities taking place throughout 2015 to mark their tenth anniversary, and attracted nearly 200 entries across five categories.

The awards are designed to recognise the creative and innovative work being undertaken at the interface between research and film by world-leading researchers, practitioners and filmmakers in the UK arts and humanities research community.

Judges praised the high quality of the films submitted and, in particular, those shortlisted. Jan Dalley, Arts Editor of the Financial Times, AHRC Council member and chair of the judges, said: “The quality of the films shortlisted is an indication of a great deal of creative, innovative and highly engaged work being undertaken within the arts and humanities research community. Our congratulations go to the makers of these films and to the many others whose films didn’t quite make the shortlists.”

The winners will be announced on 12 November 2015 at a special ceremony at the British Film Institute in London.

The judging panels, which combined industry and academic experts, have now made their decisions and the shortlisted films follow, in no particular order:

The Voice of Tradition – Lucy Duran, SOAS, University of London

Best film by an AHRC/AHRB-funded doctoral student since 1998

Award for innovation in film – Best film in the last year

I Am A Spy – Sarah Wood, University of Kent

The Adventure of the Girl with the Light Blue Hair– Kristofer Erickson, CREATe University of Glasgow

The Burglar With the Yellow Hand – Katherine Blakeney

"This Island's mine" – Miriam Rey

Without a Dollar in my Pocket – Anna Brass