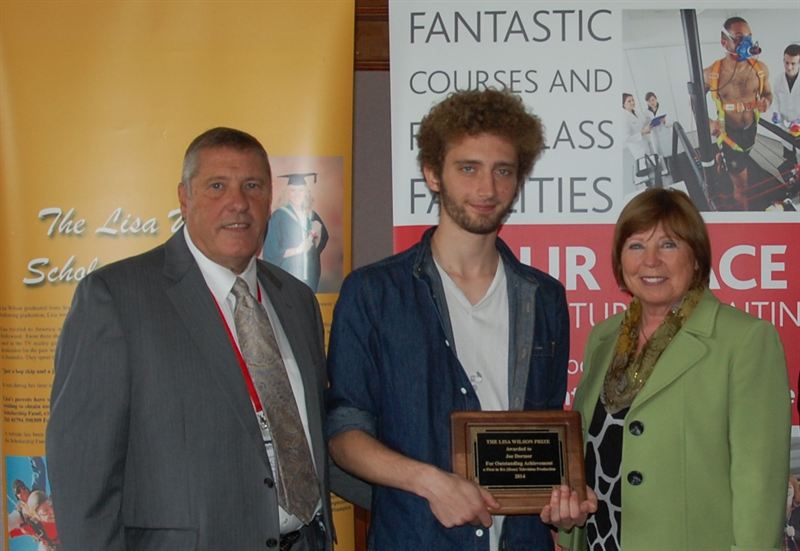 On Tuesday 23 September 2014, six more students were presented with Lisa Wilson Scholarship Fund bursaries to help them through their studies at Southampton Solent University.

Set up by the Wilson family in memory of their daughter Lisa, a Solent graduate who was tragically killed in a car crash while travelling abroad in 2002, the scholarship fund helps young people to fulfil their educational dreams and ambitions.

More than 75 student bursaries, each worth £1000 per year for up to three years, have now been funded by the charity.

Speaking at the scholarship awards ceremony, Clive Wilson said: “This year the charity has reached a fundraising milestone of £250,000. Through the £1000 annual bursaries, this equates to a legacy of 250 years of education. Lisa would have been ecstatic.”

On receiving his award, second-year student Tom Courtney said: “Studying film I need the most up-to-date software – I’ve used the money to help buy editing software that allows me to stay current and helps produce the best pieces of work.”

Clive also said: “Her memory lives on through the charity and using Lisa’s legacy, we hope to increase the number of student beneficiaries to 100 in the next few years.”

Southampton Solent University offers more than 23,000 students over 200 qualifications ranging from HND to PhD, in subjects such as maritime education and training, fashion and design, media and television, music, health, sport and leisure, business, IT and technology. The University was awarded the 2013 Quality Assurance kitemark for quality and standards of teaching and learning. Solent was voted one of the most creative universities in the UK in a Which? University 2013 poll of students. Solent Business School has been awarded ‘Gold approval’ by the Association of Chartered Certified Accountants (ACCA) and the Small Business Charter Award, which is supported by the Association of Business Schools and the Department for Business, Innovation and Skills.

About the Lisa Wilson Scholarship Fund

The fund is available to help young people with the cost of higher education while studying at Southampton Solent University. A minimum of four scholarships are awarded annually for new students applying to FdA, HND or BA/BSc degree courses.
The scholarship of up to £1,000 per year, for up to three years, helps students who have overcome adversity and can demonstrate why they need extra financial help with their studies. For more information about the charity, including details of the Lisa Wilson Scholarship Fund, visit www.lisathedaddy.com.