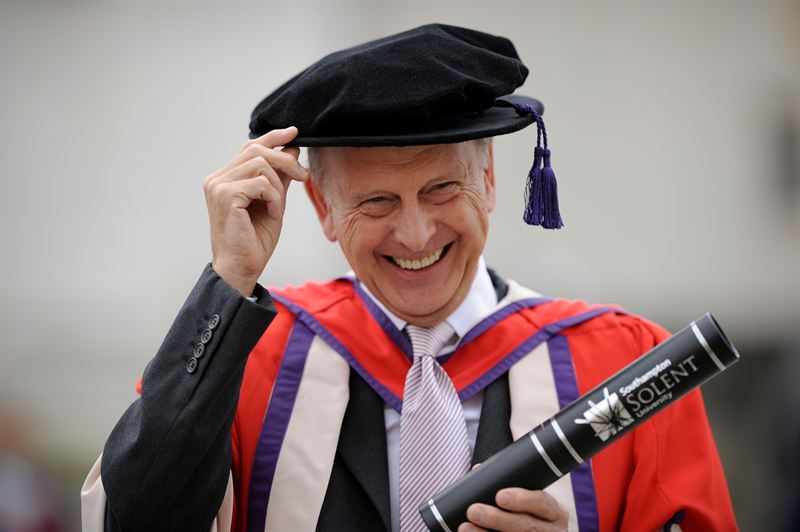 Belfast born Paul Smith CBE, founder of Celador Entertainment received the honorary degree of Doctor of Media from Southampton Solent University today in recognition of his outstanding contribution to media and entertainment.

Paul is a Visiting Fellow of Southampton Solent, and students have been benefitting from Paul’s unparalleled industry skills and expertise for over a year, a relationship which has forged a strong link between him and the University.

On receiving his award of Honorary Doctor of Media at the awards ceremony on 17 November, Paul Smith CBE said congratulated the students on choosing the media industry for their future careers. “You have entered a phenomenally competitive business,” he told them. “But it is still always looking for talent. We want to find the next person who will bring us a wonderful script, a great comedy performance, a great piece of music.

“Don’t let anybody put you off what you have set your heart on,” he continued. “The way that you will feel when you are successful, and you will be, is far greater when you work in a business like this than when you choose something which is more formulaic.

“Do not give in to those that will tell you it can’t be done. Don’t ever disbelieve in your talent and your capability. It’s a very, very, very hard business. But if you are determined and you stick at it, then you will be successful.”

Founder and owner of Celador Entertainment, Paul has led the business over the last thirty-five years from its origins as a pioneering television facilities company, through BAFTA and Emmy award-winning global TV production, and multiple Oscar triumph in the film industry.

Paul is probably best known for bringing ‘Who Wants to Be a Millionaire?’ to the world’s television screens. In 1999, the UK version won him a British Academy Award for Best Light Entertainment Programme or Series. The programme went on to become a TV sensation in over one hundred countries and is widely recognised as the most successful television format ever.

Slumdog Millionaire, which Celador produced and on which Paul was an Executive Producer, is one of the most successful British-made films of all time. In 2009 it collected four Golden Globes, seven BAFTA masks and eight Oscars, including Best Director and Best Picture.

Paul has continued to produce numerous other television light entertainment programmes and several films. Celador Radio Broadcasting currently owns and operates twenty radio stations across the South of England including The Breeze.

He was appointed a Commander of the Order of the British Empire in the Queen’s New Year 2012 Honours List.