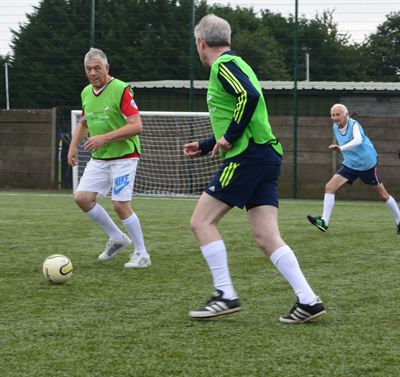 Football enthusiasts can walk their way to better fitness, a new study from Southampton Solent University’s sport scientists has shown.

Just a couple of hours of walking football each week improved fitness and reduced body fat in the subjects, all men over 50, after just 12 weeks – and also increased the subjects’ enthusiasm for ongoing physical activity.

Matt York, Football Development Officer at Hampshire FA believes the involvement of Solent University’s sport scientists could ensure the game is more widely recognised as a tool for engaging older men in a healthy lifestyle: “As a county we have seen the explosive growth of the sport, from one team to over 20 in the past year with 300 players participating weekly.

Walking Football holds a unique attraction for older men and will hopefully lead to distinctive health benefits for the participants. I look forward to working further with the University to try and attract backing for a larger research study from both the football industry and the health sector,” he added.

A series of physiological and psychological tests were conducted before and after the programme duration. The study concluded that walking football improved all anthropometrical and fitness measures, as well as producing positive attitudes to physical activity, in particular walking football.

Professor Stewart Bruce-Low, research lead and Laboratory Director at Southampton Solent says: “With the potentially crippling over-use of the NHS, it is imperative that the UK population takes much greater ownership of their health and wellbeing to help relieve the stress placed on this service.

Our results from this initial pilot study suggest that walking football is a potentially effective public health intervention for this particular demographic of the population which we hope will be one of a number of approaches that in congruence could alleviate the stress on the currently over-stretched NHS.” 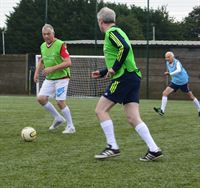