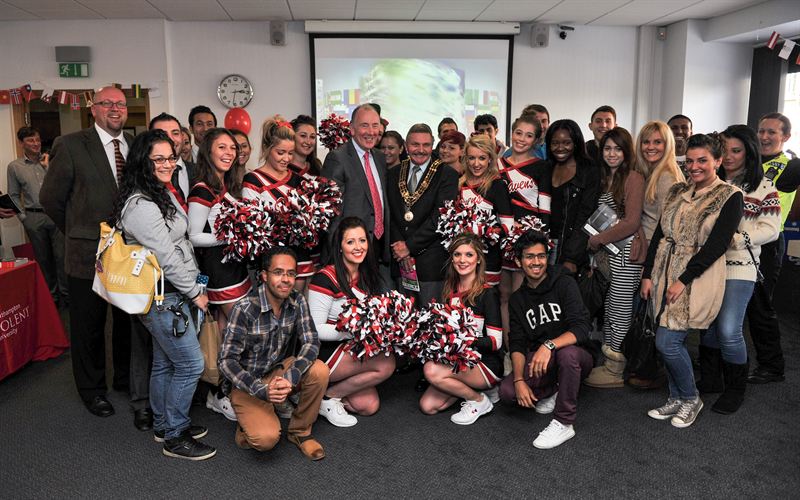 Derek has made an outstanding contribution to the city over a number of years having secured widespread respect throughout the community and has become a long serving, principled and respected councillor.

Professor Van Gore presented the award and said: “Derek is widely admired and respected across the city, irrespective of party affiliation or other divide.

“He combines energy, personal warmth, stamina, heart and above all huge integrity. We are delighted to award him the University’s Community Fellowship.”

Councillor Derek Burke added: “I was very touched and honoured to have been awarded the fellowship; it’s a privilege to work in our city and to work very closely with the team at Solent.

“The university is in the heart of our city and has a great record of working with us and the wider community. We all deserve recognition for making Southampton a great place to live and work.”

Born in Shirley, Derek was educated at Merryoak School in the city. He has been a stevedore in the city docks throughout his working life and currently works for Solent Stevedores.

He was first elected to Southampton City Council in 1990 and spent the first four years representing the Millbrook ward before being elected councillor for Bargate in 1997.

Elected Sheriff in May 1998, Derek was appointed Chair of the Council following the death of the city’s Mayor, Councillor Michael Andrews, in a flying accident. In May 1999 Derek was first elected Mayor of Southampton, a role he reprieved in 2012.

From 2000 to 2003, he became the council’s Executive Member for Leisure and Tourism with responsibility for Southampton’s sport and recreation facilities, libraries, City Art Gallery, heritage and culture.

Derek has supported the university in both his capacity of Mayor and beyond with his attendance at many key campus events including the One World Fair which welcomes new students to multicultural Southampton during Black History Month, while celebrating their home cultures from around the world.

Having worked in the docks all this life, Derek kindly opened the Port Perspectives exhibition at the university’s Solent Showcase gallery to celebrate the 175thanniversary of the city’s port in October.

FOR FURTHER INFORMATION CONTACT THE MEDIA OFFICE ON 023 8031 9642 or email events@solent.ac.uk

Southampton Solent University offers more than 23,000 students over 200 qualifications ranging from HND to PhD, in subjects such as maritime education and training, fashion and design, media and television, music, health, sport and leisure, business, IT and technology.
The university was awarded the 2013 Quality Assurance kitemark for quality and standards of teaching and learning.
Solent was voted one of the most creative universities in the UK in a Which? University 2013 poll of students.