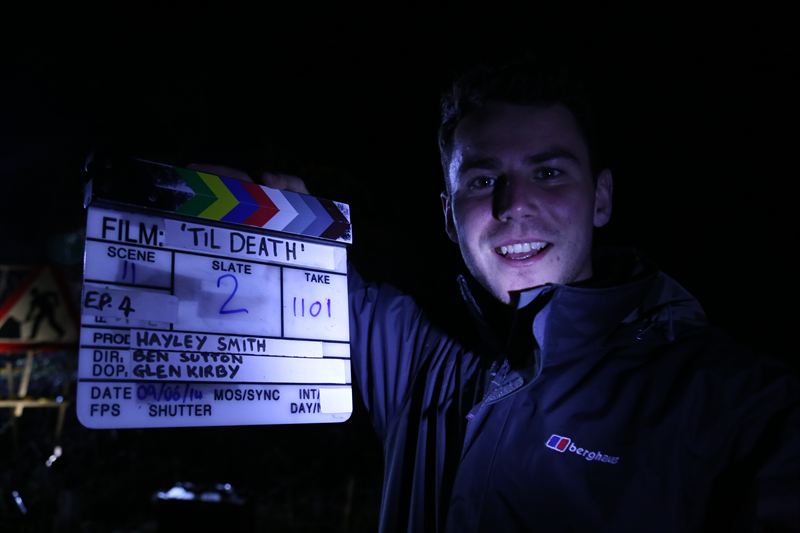 A TV drama created by students, graduates and staff at Southampton Solent University has been nominated for Best British series by Raindance Web Fest in the Raindance Independent Series Awards.

Originally screened on Solent TV, the University’s online television channel, ‘Til Death is a controversial and comedic tale of two neighbours united by their sleepy rural surroundings and their growing blood lust.

Written, directed and produced by Solent graduates Rob Jones, Ben Sutton and Hayley Smith, the production of the series gave fellow students and graduates the opportunity to develop the skills learned at university with real-world work experience.

Producer Hayley Smith says: “I am extremely proud that Solent TV's flagship production has gained recognition at Raindance. This large scale production wouldn't have been possible if it wasn't for the talented staff and students involved and the backing of the University, for which I am very grateful.”

‘Til Death is one the films to premier at the festival, which recognises upcoming talent within the industry and celebrates independent, new and alternative filmmakers.

Tony Steyger, Academic Leader for Solent Productions, which runs Solent TV, says: “Making a series of such high quality is an achievement by anyone's standards. That it has been produced by students and staff here at Solent University makes it extra special. I am very proud of this nomination - it is very well deserved.”

This year’s judges or ‘jurors’ of the awards include Conde Nast’s Director of Video Content, Danielle Bennison-Brown, Head of YouTube’s Next Lab Europe, Middle East and Africa at Google, David Ripert and Channel 4’s Head of All 4 and Digital Content, Richard Davidson-Houston.

This year’s Raindance Film Festival takes place in London from 23 September in Central London, screening 100 feature films and more than 150 short films. The Raindance Web Fest is from 25 September.

The ‘Til Death plot involves local handyman, Steve, a quiet guy and friend to everyone in his local community. But Steve hides a dark secret. By day, he is the adored neighbour. By night, he commits violent murders, ridding his perfect little town from the scum of society. Steve has a system, and the system works. But all that changes when a new neighbour, Isabel, moves in next door, and she has her own secrets too.

Solent TV is the latest project from Southampton Solent University’s creative community. It’s a platform to showcase the best content made by students, from short features to dramas and documentaries. This broadcasting project serves all students across the university and is an open and inclusive environment for fostering ideas and developing new opportunities.

Raindance Web Fest is the UK’s only dedicated web series festival and streaming video industry networking event, which takes place during the Raindance Film Festival from 25 to 27 September. It features screenings and panel discussions with industry experts on topics from digital storytelling to creating the social TV experience.