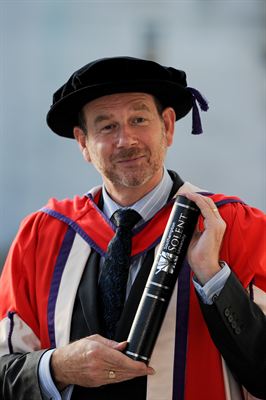 Ian Murray, Editor of the Southern Daily Echo, received an honorary degree of Doctor of Media today from Southampton Solent University in recognition of his outstanding contribution to the media.

A familiar figure to journalism students at the University, Ian not only delivers master classes but, as Editor of the Southern Daily Echo, the flagship daily paper of the Newsquest group based in Southampton, he is also a major employer for Solent graduates.

On receiving his award of Honorary Doctor of Media at the awards ceremony on 18 November, Ian Murray said: “A free press is a jewel in our nation’s crown. It may be a diamond in the rough, it may need polishing up, but when you do, you will see lots of visible flaws, but it is far too precious to throw away. If I get the opportunity to look back and imagine my career as a crown, or perhaps a tiara, without doubt the most glittering jewel will be the honour you have bestowed upon me today.”

With a remit that includes editorial responsibility for Newsquest’s Hampshire titles, Editor-in-Chief of Newsquest Hampshire’s associated websites and editing the weekly free News Extra Series in the Southampton region, Ian still manages to find the time for both students and the University. He is working closely with the Head of School in Writing and Communications, Professor Suzanne Dixon, to deliver a new two-year degree course, which begins in September 2015.

Ian is a member of the Newspaper Society’s Marketing Committee and a member of the Editor’s code Committee formerly of the Press Complaints Commission, now the Independent Press Standards Organisation (IPSO). He joined the Board of the Society of Editors in 2010 and has only recently stepped down as its President.