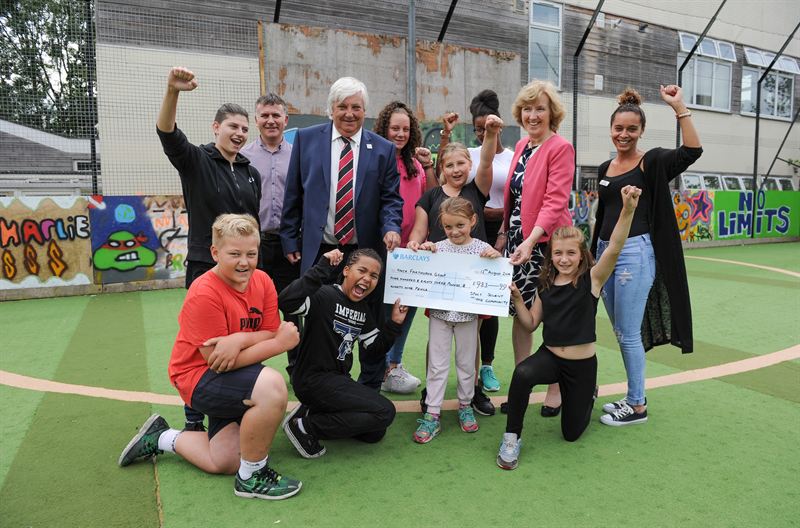 Young people in Hampshire are getting the opportunity to play more sport after three local clubs were awarded funding by Sport Solent in the Community.

The charity, led by Southampton Solent University, is a small grant scheme that supports community groups and individuals in Hampshire.

Professor Mike Wilkinson, charity trustee and Deputy Vice-Chancellor (External Engagement) at Solent, said: “An important part of our vision as a university is to be a catalyst for social justice and through the charity, these awards are helping local organisations address this important issue. We are proud to be able to help in this way.”
This year, funding has been awarded to Southampton Children’s Play Association, YMCA Newtown Youth Centre and the Hurricanes Rugby Club, following a round of funding applications in which 39 bids were received.

Bids can be made from a minimum of £100 to a maximum of £1000 for sports equipment, training, coaching and venue hire to help deliver programmes of sport or physical activity.  Southampton Children’s Play Association provides organised play facilities for children aged five and over. Speaking about the recent funding, Anna Roberts, Play Development Manager, said: “The funding was a huge benefit to us as we used it to provide sports and dance workshops throughout 11 individual play schemes during the summer holidays.” The YMCA Newtown Youth Centre is helping to transform communities. They used their grant to help fund equipment for their recently refurbished centre that was relaunched in May 2015.  YMCA’s Area Director Andrew Simpson explains how grateful they were for the funding: “We have been able to use the money to purchase much needed equipment which has made the opportunities for young people better, as well as helping us to structure our sessions better.

“The YMCA works in partnership with many agencies and has now developed strong links with Southampton Solent University, which is making a real difference to our communities” he continues.

Meanwhile Hurricanes Rugby Club, based at Eastleigh Rugby Football Club, and the first of its kind in the South of England, works with young adults with learning difficulties and slight physical disabilities. They applied for funding for a winter training kit, as the team train throughout the year.

In an effort to help fundraise for the charity, the University’s own Solent Sport staff took part in Tough Mudder in September 2015.

Charity trustee and the University’s Director of Solent Sport, Phil Green, says: “I’m really proud of the staff for putting themselves through this for such a good cause. The event is about endurance and teamwork and it’s an amazing feat to complete it.”

Speaking about the gruelling event, Student Workforce Development Officer, Rebecca Jones, said: “The day was thoroughly enjoyable and it gives you an added sense of motivation knowing that the money is going to a good cause. As a relatively new charity it helped raise awareness of the support that is being offered to the community.”

Sport Solent in the Community is looking at how it can help even more clubs and organisations in the future, with a number of fundraising activities being planned.

Donations to the charity can be made online at www.givey.com/sportsolentinthecommunity.

About Sport Solent in the Community

Established in 2012, Sport Solent in the Community is a registered charity that provides a small grant scheme to support community groups and individuals in Hampshire.

Bids can be made from a minimum of £100 to a maximum of £1000 and funding is typically available for sports equipment, facility hire, training, coaching and venue hire.

The charity aims to enable community groups and individuals to deliver programmes of sport or physical activity that benefit people in Hampshire, whether helping young people by developing their skills or advancing their education, or providing recreational and leisure time activities in the interests of social welfare and widening participation.

Led by Southampton Solent University, the charity works with Active Southampton, a group of local organisations working in partnership to promote sport and physical activities within Southampton. For more information visit http://activesouthampton.co.uk/about/charity.