Students given the ‘Green’ light to live-stream 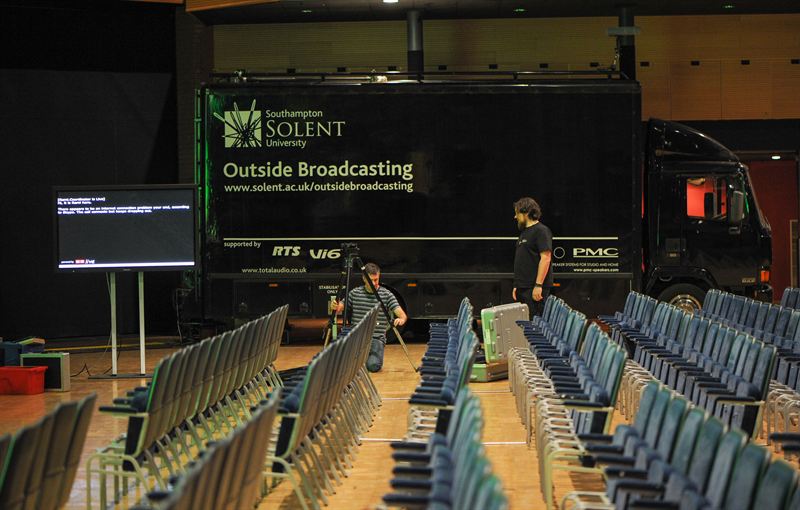 Fifteen first, second and third-year media technology and television production students used the University’s outside broadcast vehicle to stream the main speeches and debates live from the conference on the Green Party’s official website. They also recorded and edited fringe sessions.

Jacob Cooper, 21, used the opportunity to expand his skills. The third-year BSc (Hons) Sound Engineering student operated a camera during the four-day conference.

“I have a little bit of camera experience, but not a huge amount, so this was something different for me,” he says.

“I’m trying to break into the outside broadcasting industry, and this opportunity has helped me diversify what I do. When I finish my degree at Solent, this will mean that I’m not necessarily locked into a sound position. It’s been fun so far; and I enjoyed seeing the whole operation. I’ve worked on productions before but never from a camera side – I’m normally a sound runner and spend a lot of time doing my own thing. I’m excited to build my experience.”

Fellow student Chloe Williams, 19, was excited to see the live streaming process. The second-year BA (Hons) Television and Video Production student, who has recently secured a camera operator job at Southampton Football Club, was excited about this opportunity.

“I love multi-camera productions,” she says. “I’ve just started a new job at Southampton FC filming the build up to matches for the big screens – I’m a big fan of football.

“I’m still deciding what avenues I’d like to take – live production and outside broadcasting, or documentary productions – and I thought this opportunity could help me determine which one I want to go into. At Solent, we’ve already completed a few modules on live production, and I’ve done a lot of camera work already. I was especially excited to see how the live streaming worked as I’ve never done it before. It’s a great new skill to learn.”

This was a great opportunity for the students to develop their skills and add valuable work experience to their CV.

Sean Lancastle, Broadcast Business Development Manager in Solent’s School of Media Arts and Technology, says: “I am really pleased that we were chosen to be the Green Party's provider for all their website content from their conference. It gave students from all the courses within the television and sound programme group the chance to work on a high-profile live political event.

“This kind of opportunity rarely comes along and it provides invaluable experience for students looking to work in news and current affairs.”