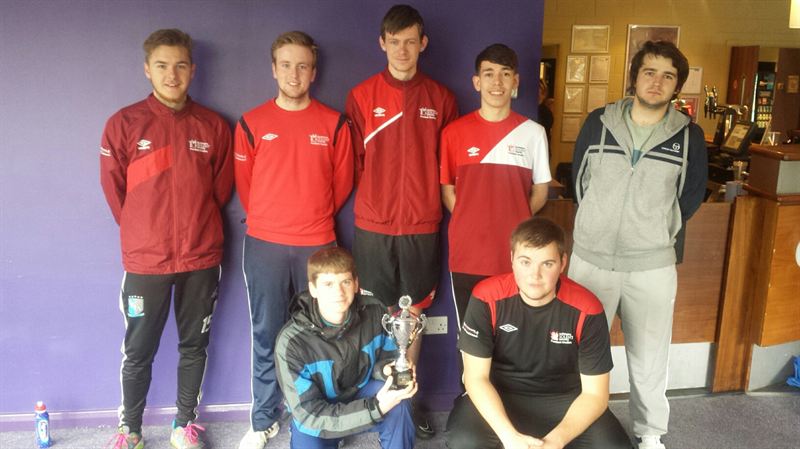 Integration and inclusivity are prominent goals for the football community and students from Southampton Solent University are playing their part, working with homeless people from across the city.

As part of a work-based community project, set up in partnership with Hampshire Football Association (FA) and Chapter 1, a charity that specialises in providing accommodation and support for vulnerable people, students designed opportunities for disadvantaged groups to get involved in the game.

Five teams competed in the tournament, including more than 20 residents from local homeless shelters. Held at Goals Southampton in April, it was run in a league format, ending with a final and a third and fourth play-off game.

Dr Stefan Lawrence, Senior Lecturer in Football Studies, said: “The students’ implementation of a 'development through football’ approach within a real-world context extends their commitment to social justice beyond the classroom.”

The tournament was the result of months of hard work by first and second-year BA (Hons) Football Studies students, who refereed the project as part of their studies.

In a bid to encourage and build participation in football among disadvantaged people, students work to live briefs set by Hampshire FA in the first year of their course, then plan and develop them through to delivery in year two, getting real-life work experience in the football industry.

This is the second, successive group of students to contribute to a community project, with many students now working as voluntary or part-time staff for Hampshire FA.  The project also contributes to the Football Association’s national targets, helping to increase football provision.

Kim Wilcox from Hampshire FA commented: “Through this project, with the support and guidance of Chapter 1, the students have engaged with a group of participants that otherwise would have slipped through the net. They have approached the project with tenacity and determination, providing informal but regular playing opportunities resulting in an extremely well organised competitive offer.

“In partnership with the University and Chapter 1, we hope to develop the project further to provide a regular, competitive offer of affiliated football,” she continued.

Dr Lawrence also said: “Such is the quality of their endeavours, the students have been invited to present their work at the upcoming ‘Football as Inclusive Leisure’ conference.”

The conference, which takes place on 20 May 2015, brings together stakeholders from across the football industry to discuss the concept of football as inclusive leisure, sharing ideas and best practice. Keynote speakers include Roisin Wood, Director of Kick it Out, Ian McDonald from Newcastle University and Professor Ben Carrington from the University of Texas at Austin.

For more information and to book tickets for this event, visit http://portal.solent.ac.uk/events/events-articles/2015/may/football-as-inclusive-leisure-conference.aspx.

About Southampton Solent University
Southampton Solent University offers more than 19,000 students over 200 qualifications ranging from HND to PhD, in subjects such as maritime education and training, fashion and design, media and television, music, health, sport and leisure, business, IT and technology. The University was awarded the 2013 Quality Assurance kitemark for quality and standards of teaching and learning. Solent was voted one of the most creative universities in the UK in a Which? University 2014 poll of students. Solent Business School has been awarded ‘Gold approval’ by the Association of Chartered Certified Accountants (ACCA) and the Small Business Charter Award, which is supported by the Association of Business Schools and the Department for Business, Innovation and Skills.