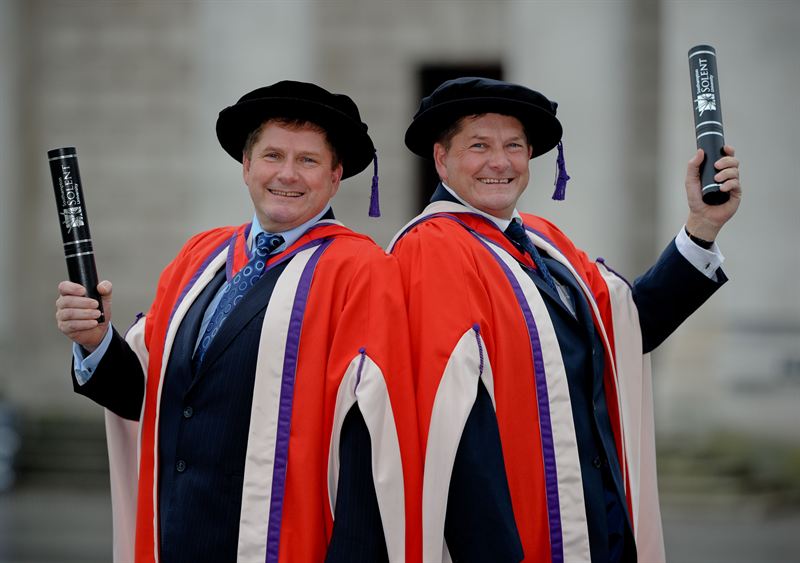 Messrs Pete and Pip Tyler, Managing Director and Overseas Director respectively for Neilson Active Holidays Ltd, have both received honorary degrees of Doctor of Business today from Southampton Solent University in recognition of their outstanding contribution to the tourism industry.

Southampton Solent has had a strong working relationship with Pete and Pip for more than 20 years. The University has undertaken some consultancy work for them, studying the motivation and decision-making process that families go through in deciding on family activity holidays and the twin brothers reciprocated by delivering occasional guest lectures.

On receiving his award of Honorary Doctor of Business at the awards ceremony on 21 November, Pip Tyler said: “Pete and I are humbled by this honour bestowed upon us. As you sit here at the start of your working life, you will come across many opportunities. Winners spot these and act on them. Others don’t and unless you try, you just won’t know what you’re going to miss.

Thirty years ago on a beach in Greece," he continued, "we couldn’t have dreamed of leading a business turning over nearly £100 million, over 100,000 passengers a year, operating in eight European countries, employing over 1,000 talented staff. There are very few jobs in life you can’t learn the skills to do but our business is about delivering dreams and for that you need staff with the right attitude.”

Referring to students embarking on the next stage of their lives, Pete Tyler said: “Thank those that have given you the right attitude in life and don’t forget to capitalise on this privilege you’ve got now to give you a leg up in the world. Enjoy life.”

The twins have worked together for many years and are widely respected within the tourism industry. Sharing a love of water sports, they have been at the forefront of developing activity holidays for over 30 years. Responsible for the activity brands under Falcon, Sovereign and Sunworld the business was rebranded in 1994 as Neilson Active Holidays. A recent private equity backed buyout once again sees Neilson in independent hands operating from its base in Brighton Marina but active in eight countries across Europe. Today Neilson Active Holidays is Europe’s leading specialist for ski, beach club and sailing holidays.

Outside of their business interests both Pete and Pip are involved with a number of charities and groups. For Pete this has included various high profile roles ranging from RNLI Chairman and Brighton Marina Yacht Club Commodore. His current focus remains with the East Brighton Trust (EBT) which carries on the great work he was involved with as part of the Government lead on the ‘New Deal for Communities’ project within Brighton working with local groups and schools. Pip is a former vice-chair of the Thomas Cook Children’s Charity and a trustee of an arts based regeneration charity. He actively promotes the benefits of sports coaching and has set up a new apprentice scheme venture with UKSA on the Isle of Wight which will continue to facilitate youth involvement with sports.