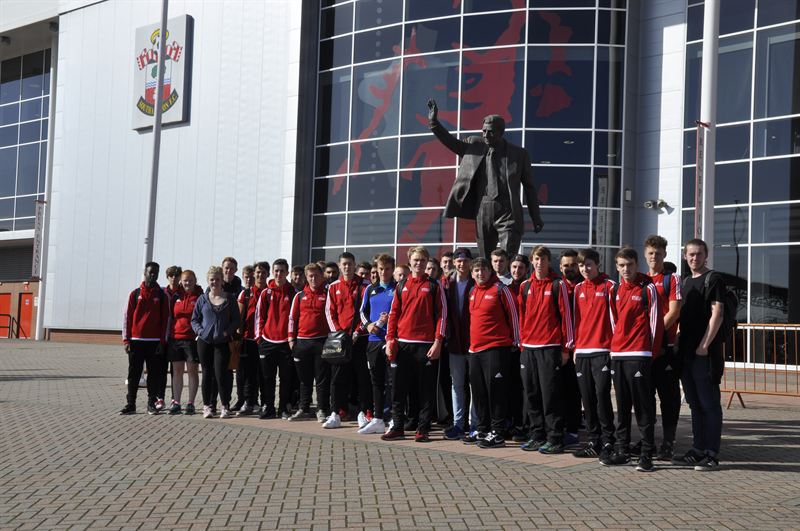 Sports-minded students from Southampton Solent University are being given the opportunity to boost their CVs and give back to the community thanks to a new initiative with Southampton Football Club’s aligned charity, Saints Foundation.

For the first time students studying the BA (Hons) Sport Coaching and Development degree at the University were invited to an open day event on 25 September at St Mary’s stadium promoting the wide range of community projects run by the Foundation.

Students were able to find out more about all projects being run and had the opportunity to submit their CV to any they were interested in volunteering for.

The successful students will be offered placements from October to December, with another volunteer recruitment process set to take place for placements between January and April 2016. Volunteers could then later be eligible for staff positions within the Saints Foundation once they graduate.

Henry Dorling, senior lecturer in sport development and coaching at the University, says: “It’s a great opportunity for the students to get real-world experience that will enhance their studies as well as improving their employability and entrepreneurship.”

First year student Thomas Lewis says: “It’s only been a week into my course but I am pretty excited already. It has been induction week this week and then to end with the Saints Foundation Open Day has been really cool. I’m a big football fan, and I think having this kind of opportunity so early on is very impressive.

“I want to go into teaching and with some of these opportunities we get to go into schools. This is great for me, as I can get to understand the situation with school kids and how to deal with them.”

Projects that the students can get involved with include:  Saints4sport, a vulnerable adults’ programme for those that may be homeless, face mental health issues, or alcohol or substance misuse; Senior Saints, working with people with early onset Alzheimer’s disease and dementia patients, using the sport and memories network; and Saints Girls, a female coach-only project encouraging girls between the ages of 14 and 16 to get involved in playing football.

Paul Hedges, senior project officer at Saints Foundation, says: “The students will be vital in helping with these groups. I can’t effectively run a group of eight people by myself because there would be conversations going all over the place. If four students attend these groups, each couple of people have a dedicated person there to lead the conversations and start them off.”

Running the day was Solent alumni, Mike Dixon, a senior project officer with the Foundation. While studying his football studies degree, he volunteered for the Saints Foundation, which became a paid job once he had graduated. He advises students: “While you’re at university, get some practical experience. You should use some of your free time to volunteer and get the experiences that employers really value.”