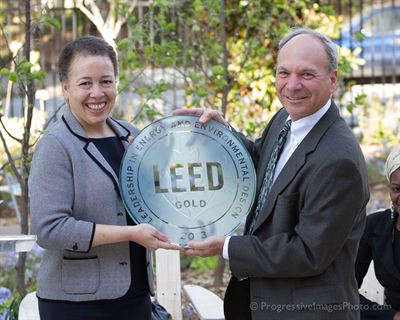 ATLANTA (October 17, 2014) -- Spelman College has partnered with Chevrolet to build upon the College’s mission to achieve climate neutrality. As a result of the College’s sustainability initiatives, Spelman will sell the automaker carbon credits, which will net the institution up to $100,000. In recognition of the partnership, Spelman will host a presentation with Chevrolet on Oct. 22, Campus Sustainability Day.

Spelman is one of 12 colleges and universities to take part in Chevrolet’s campus energy efficiency campaign to reduce carbon emissions and the only women’s college, Georgia college and historically black college or university.

“Spelman has made significant progress in reducing our ecological footprint with the implementation of our Climate Action Plan and the integration of specific goals to achieve a ‘greener community’ into our Strategic Plan for 2017,” said Spelman College President Beverly Daniel Tatum, Ph.D. “We are excited about our partnership with Chevrolet as it is recognition of Spelman’s ongoing efforts to increase our stewardship of our natural resources.”

“We are halfway to our 2031 carbon emissions goal of a 50 percent reduction. The funds from the Chevrolet Campus Clean Energy Campaign will provide a jumpstart for further reducing our greenhouse gas inventory,” said Art Frazier, Spelman College director of facilities management and services.

Funds received from the sale of carbon credits to Chevrolet will be reinvested in campus energy efficient projects and technologies such as LED lighting and building retro commissioning to ensure Spelman buildings are energy efficient.

The agreement is part of a comprehensive voluntary carbon reduction initiative by Chevrolet launched in 2010 to prevent up to eight million metric tons of carbon emissions from entering the earth’s atmosphere. The company is investing in community-based carbon reduction projects across the country. To date, all investments have been made through the purchase of certified carbon credits, from institutions such as Spelman, reflecting Chevrolet’s desire to catalyze projects that represent a beyond business as usual commitment.  Chevrolet will buy and retire the credits, meaning they will not be used to offset emissions related to specific Chevrolet operations or products – or those at any other site.

“Our Chevrolet carbon-reduction initiative reflects our commitment to do more than just manufacture efficient vehicles in a responsible way,” said David Tulauskas, General Motors director of sustainability. “We want to support the ingenious efforts of colleges such as Spelman that are leading the clean-energy movement and engaging students along the way.”

The United States Green Building Council works closely with institutions like Spelman that have made the shift to green building efficiency and LEED certification.

“USGBC is proud to support Chevrolet in this groundbreaking program that provides funding to campuses for reducing their greenhouse gases,” said George Bandy, Jr., chair of the council. “We applaud Spelman College for their participation in this program and continuing to take a leadership role by making a choice to green their campus and change the world.” 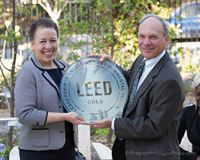