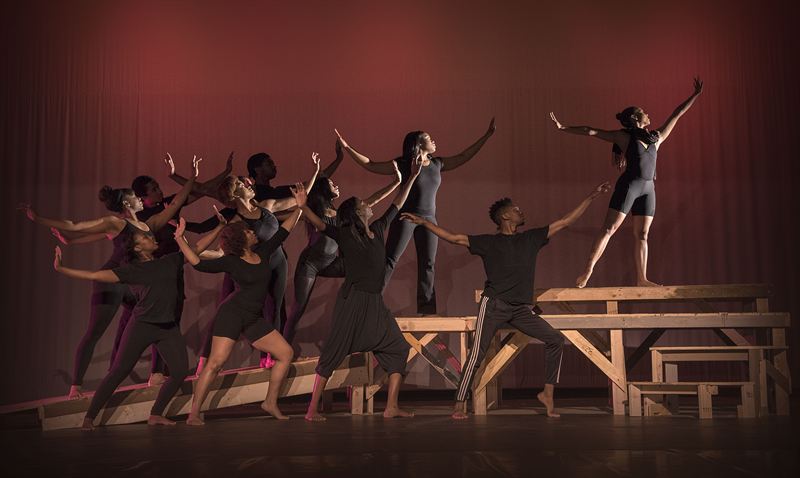 The dancer/choreographer, who has been in residence at the College since August 2015, has created a debut performance that blends personal narrative and modern dance around a corps of students who will share their stories on a stark and at times dramatically-lit stage. The production also features a reading by poet/playwright Ntozake Shange, author of the Tony Award nominated “for colored girls who have considered suicide/when the rainbow is enuf.” Shange will recite from her newest choreopoem “lost in language and sound: or how I found my way to the arts: essays,” her autobiography of becoming an artist.

The inspiration for “Journey to Memory Falls” is two-fold, explained McIntyre. It derives from her fascination over the last 12 years with developing “dance-driven dramas” based on authentic, actual narratives of individuals. Her time spent at Spelman has also had notable influence on her creative process.

“Being in this environment, I have been inspired by the energy of my students and by the conversations I’ve had over the months with students,” said McIntyre. “All of this combined made me wonder about their background and how they came to be who they are.”

Cierra Jones, a Spelman junior who aspires to perform on Broadway, studied under McIntyre while in a National Black Arts Festival production of “Doxology” at the College a couple of years ago. She was eager for the chance to work with the visiting scholar again. “Ms. McIntyre taught me so much about movement and her aesthetic,” recalled Jones. “She’s very inspiring. I wanted to be around her and learn from her.

“Being in this production has taught me how to multi task as a dancer and actress,” added Jones. “It’s also helped me to fully embody and embrace my own childhood story, and the fun I had growing up in my neighborhood. Those times influenced who I am today − a performer who loves to dance, since I was five-years-old, and be on stage.”

“Journey to Memory Falls” marks the first time McIntyre and Shange, who have collaborated for more than four decades, have performed together at Spelman.

“Ntozake coming to Spelman means a lot to me,” said McIntyre. “Since I have had this special residency at Spelman, she was the first person I thought of to come into this environment that has been supportive of me, to share her brilliance, creativity and wisdom with my Spelman family.”

In advance of the culminating event, McIntyre and Shange will be joined by Aku Kadogo, a Spelman visiting scholar, for “three colored girls: A Conversation,” Tuesday, April 19 at 6 p.m. in the Camille Olivia Hanks Cosby, Ed.D., Academic Center Auditorium. Kadogo was in the original Broadway production of “for colored girls who have considered suicide/when the rainbow is enuf” and McIntyre choreographed the television adaptation of the play. The three will discuss their collaborative theatrical work as well as their perspectives about the state of women of color in the arts.