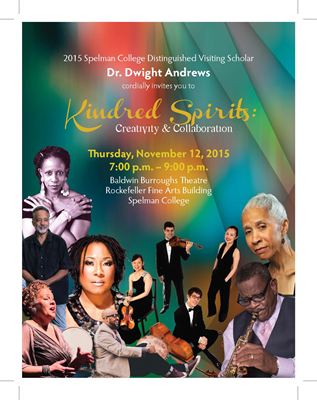 ATLANTA (Nov. 10, 2015) -- As a Spelman College Distinguished Visiting Scholar for the past year, Dwight Andrews, Ph.D., has divided his time between the classroom – teaching students about the correlations between spirituality and jazz, the Harlem Renaissance and the music of the 1960s Black Power Movement – and engaging with members of the Spelman community around campus.

Dr. Andrews’ inherent ability and desire to make connections will be showcased at his Distinguished Visiting Scholar culminating event, “Kindred Spirits: Creativity and Collaboration,” at 7 p.m., Thursday, Nov. 12, 2015, in the Baldwin Burroughs Theatre in the John D. Rockefeller Fine Arts Building, on the campus of Spelman. “Kindred Spirits” will feature a diverse collection of his works performed for the first time in a single performance.

“Dwight Andrews’ tenure as a Distinguished Visiting Scholar has been exceptionally rewarding for Spelman,” said Myra Burnett, Ph.D., Spelman interim provost and vice president for academic affairs. “He has encouraged interdisciplinary dialogues about connections between historical and musical traditions, to the delight of our students, faculty and staff. We are honored to have had the opportunity to learn from an accomplished academic, musician and composer.”

Andrews drew inspiration for “Kindred Spirits” from the works of novelist, poet and playwright James Baldwin and artist and author Romare Bearden − both of whom were influential in his development as a musician because of their passion and discipline. “This program will suggest, for example, how the words of a poet can inspire a new sound or how a visual image can dance and animate a dancer. My hope is the audience will receive a glimpse of my musical universe with all its constellations,” said Andrews, an associate professor of music theory and African American music at Emory University and senior pastor of First Congregational Church UCC in Atlanta.

Andrews has appeared on more than 25 jazz and “new music” recordings. He has been recognized for his collaborations with playwright August Wilson and director Lloyd Richards, having served as musical director for the Broadway productions of “Ma Rainey’s Black Bottom,” “Joe Turner’s Come and Gone,” “The Piano Lesson” and “Seven Guitars,” and the Broadway revival of “Ma Rainey’s Black Bottom” featuring Whoopi Goldberg and Charles S. Dutton. He provided the music direction for the Broadway revival production of “A Raisin in the Sun,” starring Sean Combs, Phylicia Rashad and Audra McDonald. His film credits include” The Old Settler” starring Phylicia Rashad and Debbie Allen, “The Piano Lesson,” HBO’s “Miss Evers' Boys” and the PBS documentaries, “W.E.B. Dubois: A Biography in Four Voices” and “Homecoming: The Plight of Black Farmers in Georgia.”

“Kindred Spirits: Creativity & Collaboration – An Encounter of Sound, Symbols and Signifyin’” is free and open to the public. Seating is limited. Spelman is located at (GPS address) 440 Westview Drive, Atlanta SW 30310. For more information, visit www.spelman.edu. 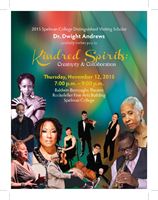