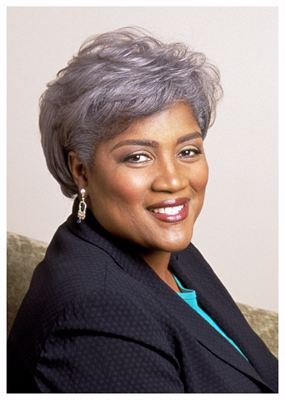 ATLANTA (April 14, 2015) -- Donna Brazile, an academic, author, syndicated columnist, television political commentator, and political strategist, has been named Commencement speaker for the Spelman College Class of 2015. Brazile, who will receive an honorary degree, will address more than 475 graduates on Sunday, May 17, 2015, at 3 p.m. at the Georgia International Convention Center.

“Donna Brazile has been a trailblazer in the political arena and a staunch advocate for human and civil rights,” said President Beverly Daniel Tatum. “We are pleased she will have an opportunity to impart words of wisdom to Spelman graduates as they begin the next phase of life's journey, and join the ranks of Spelman alumnae who have made a choice to change the world.”

With a lifelong passion for political progress, Brazile had worked with a candidate every presidential campaign from 1976 through 2000, when she became the first African American to manage a presidential campaign. Today, Brazile is founder and managing director of Brazile & Associates LLC, a general consulting, grassroots advocacy, and training firm based in Washington, D.C. She is also the vice chair of voter registration and participation at the Democratic National Committee and former interim national chair of the political organization.

Author of the best-selling memoir “Cooking with Grease: Stirring the Pots in American Politics,” Brazile is an adjunct professor at Georgetown University, a syndicated newspaper columnist for Universal Uclick, a columnist for Ms. Magazine, and O, The Oprah Magazine, and an on-air contributor to CNN and ABC, where she regularly appears on “This Week.”

Brazile remains active in her hometown of New Orleans, where she was recently appointed to serve on the executive committee of the Tricentennial Commission, responsible for the celebration of the city’s founding in 2018. Last fall, President Barack Obama appointed her to the Fulbright Board – where she helps select candidates in the Caribbean and Latin America that will participate in the Fulbright Program.

Honorary Degree Recipient: Yvonne Jackson, C'70, founder and president, BeecherJackson Inc.
Yvonne Jackson is founder and president of BeecherJackson Inc. As president of BeecherJackson Inc., she leads the company’s consulting practice working with and serving public and private company boards on governance, organizational and succession issues. Jackson is also a former senior executive of three Fortune 50 companies and a public company director. She is chair of the Association of Governing Boards of Universities and Colleges and immediate past chair of Spelman College Board of Trustees, retiring from the board after 15 years. An outspoken leader and spokesperson, she is known as a pioneer in corporate America and in her work as an advocate and developer of programs and initiatives to support the advancement of women and people of color in the workplace. Jackson is an alumna of Spelman College and holds a Management Development Certificate from Harvard Business School.

Honorary Degree Recipient: Lisa Jackson, vice president of environmental initiatives, Apple
Lisa Jackson is vice president of environmental initiatives at Apple. She oversees Apple’s efforts to minimize its impact on the environment by addressing climate change through renewable energy and energy efficiency, using greener materials, and inventing new ways to conserve precious resources. From 2009 to 2013, Jackson served as an administrator of the U.S. Environmental Protection Agency. Appointed by President Barack Obama, she focused on reducing greenhouse gases, protecting air and water quality, preventing exposure to toxic contamination, and expanding outreach to communities on environmental issues. She has also served as chief of staff to New Jersey Governor Jon S. Corzine and as commissioner of New Jersey’s Department of Environmental Protection. Jackson holds a master’s degree in chemical engineering from Princeton University and a bachelor’s degree in chemical engineering from Tulane University. She currently sits on the boards of Princeton University, Tulane and the Clinton Foundation.

National Community Service Award Recipient: Dave Levin, co-founder of the KIPP (Knowledge Is Power Program) Foundation
Dave Levin is co-founder of the KIPP (Knowledge Is Power Program) Foundation. In 1994, he co-founded the Knowledge is Power Program (KIPP) with Mike Feinberg. In the spring of 2000, Levin and Feinberg co-founded the KIPP Foundation, which supports the opening, growth, and evaluation of KIPP schools around the country. Levin currently heads up the KIPP Foundation’s Teaching and Learning Lab focused on instructional innovation, leadership development and teaching training. Passionate about innovative teaching, Levin co-authored KIPP Math, a comprehensive math curriculum for students in grades five through eight that culminates in students completing a two-year high school Algebra I course by the end of eighth grade. Levin is a graduate of Yale University and earned a master's degree in education from National Louis University.

Baccalaureate Service
Renita J. Weems, Ph.D., a bible scholar and ordained elder in the African Methodist Episcopal Church, will serve as the baccalaureate speaker for the Class of 2015. Dr. Weems, a former visiting professor at Spelman College, is the author of several acclaimed books on women's spirituality and wholeness.  She has been celebrated by EBONY magazine as one of America’s top 15 preachers and is currently the academic dean and professor of biblical studies at American Baptist College in Nashville, Tenn. She earned her bachelor’s degree from Wellesley College, and her master’s degree and Ph.D. from Princeton Theological Seminary. Dr. Weems’ daughter, Savannah Espinosa, a psychology major, is a member of the Spelman Class of 2015. Baccalaureate service will be held Saturday, May 16, 2015, at 9 a.m. on the Spelman Oval.

To request media credentials and interviews, please complete and return the required form.