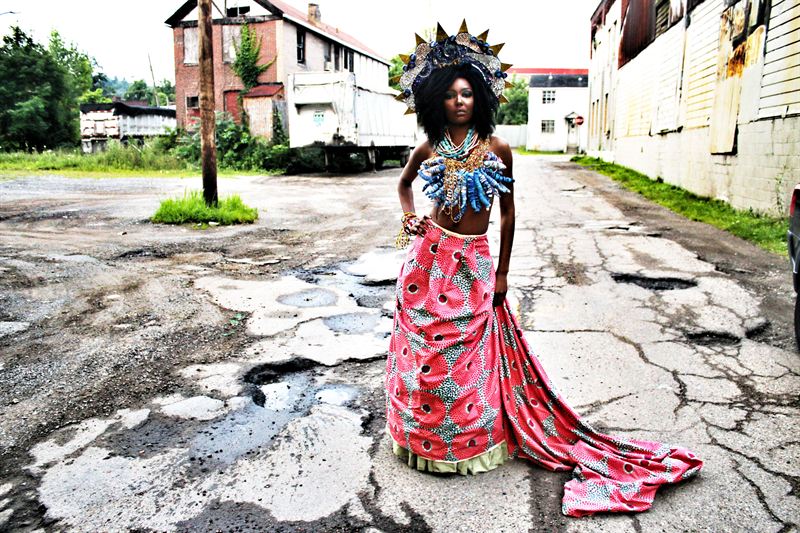 During the two years "AFRICA FORECAST" was in development, Dr. Brownlee and Dr. Massaquoi carefully considered a blend of overlapping perspectives about fashion. "The first consideration took into account how fashion is an ever-changing global marketplace," explained Dr. Brownlee. "Secondly, we considered the unique ways fashion informs the artistic practice and lives of contemporary artists; and, finally, the ways that Black women, who reside throughout the African Diaspora, use creative practices to fashion their behavior and construct their lives."

Informed by these foundational perspectives, the resulting exhibition is layered and expansive. "The women in 'AFRICA FORECAST' promote an aesthetic of renewal as they transmit—through the lens of fashion—pop art, avant-garde and experimental strategies," said Dr. Massaquoi. "The discourse of fashion, in the context of the exhibition, acts like a genre, a style, or category in which the artists amplify their identity to communicate their truth. Fashion and design are not created in a vacuum—we made a specific ask to the artists that they communicate, through their work, the relentless stimulation, innovation and objects of fascination that stir their practices."

With two women of color at its helm, the exhibition embodies the significance and impact of African Americans in the curatorial field. It also reflects Spelman College's role as a leader in the education and cultivation of African Americans in the area of curatorial studies. In January 2016, the College established one of the few curatorial studies programs in the U.S. focused on addressing the lack of diversity in the museum profession. The nine students in Spelman's program will assist with the installation of "AFRICA FORECAST" and participate in roundtable conversations with the curators as they prepare to open the exhibition.

"The curatorial studies program offers our students a unique opportunity to learn first-hand what it takes to create a first-class exhibition," said Spelman President Mary Schmidt Campbell, Ph.D. "It's also a prime example of the College's mission to develop programs and spaces much like the Museum and our planned arts, innovation and entrepreneurship center that harness the power of a liberal arts education."

Featuring photography, garments, performance, video, painting and sculpture, "AFRICA FORECAST" is a dynamic blend of influences that departs from solely commercial interpretations of fashion and industry trends. Instead, it offers interdisciplinary and poetic coverage of style and widespread approaches to dress, socialization and activism. The exhibition provides a vibrant snapshot of the current mood, lived experiences and distinct socio-cultural perspectives of the featured artists who are highly engaged, connected and global citizens.

The featured artists and designers in the exhibition examine a variety of timely and enduring topics including innovation, the body, gender roles, portraiture, beauty, style, embellishment, documentary methodology and the power of manipulating artistic mediums. Their work encourages visitors to imagine how fashion shapes their lived experiences.

"AFRICA FORECAST" showcases more than 50 works, which have been completed in the last three years—15 of which will be presented at the Museum for the first time and several created specifically for this exhibition. "Another great quality of the show is the infusion of color throughout the galleries, which work to qualify fashion’s feeling: freedom, beauty, magic," said Dr. Massoquoi. "The goal is to entice audiences and immerse them in a lyrical enclave of style."

Since the Museum was established in 1996, it has presented more than 45 exhibitions that honor its unique emphasis on art by women of the African Diaspora. "Like previous exhibitions, 'AFRICA FORECAST' presents timely and important perspectives and promises to garner popular and critical acclaim," said Dr. Brownlee. "It continues the Museum’s legacy of introducing new artists to Atlanta audiences and invites all viewers to stretch their perceptions about the range of works that Black women artists create. Acquiring work by a selection of the exceptional artists that are featured in this exhibition is in perfect alignment with the Museum's goals and growth."

Bethany Collins (b. 1984, United States/Lives and works in Atlanta and Chicago)
Bethany Collins is a multidisciplinary artist whose conceptually driven work is fueled by a critical exploration of how race and language interact.

Vanessa German (b. 1976, United States/Lives and works in Pittsburgh)
Vanessa German is a visual and performance artist and the founder of Love Front Porch and the ARThouse, a community arts initiative for the children in the Pittsburgh neighborhood Homewood.

Ayana V. Jackson (b. 1977, United States/Lives and works in New York, Paris and Johannesburg, South Africa)
Ayana V. Jackson’s photographic approaches range from reportage and portraiture to performance and a studio-based practice that crystallizes the experience of contemporary Africa and African diasporic societies.

Marcia Kure (b. 1970, Nigeria/Lives and works in Princeton, New Jersey)
Marcia Kure is a multi-media artist who is known for her drawings, photomontages and sculptures, which are critical responses to the postcolonial existential condition. In her current work, she explores materials as metaphors for the body.

Zanele Muholi (b. 1972, South Africa/Lives and works in Johannesburg, South Africa)
Zanele Muholi, an internationally-acclaimed visual activist, co-founder of the Forum for Empowerment of Women (2002) and founder of Inkanyiso (2009), has a self-proclaimed mission to "re-write a black queer and trans visual history of South Africa for the world to know of our resistance and existence at the height of hate crimes in South Africa and beyond."

Wura-Natasha Ogunji (b. 1972 United States/Lives and works in Austin, Texas and Lagos, Nigeria)
Wura-Natasha Ogunji, the recipient of a number awards including a John Simon Guggenheim Memorial Foundation Fellowship (2012), is a performance and visual artist who uses her own body to explore movement and mark-making across water, land and air.

Toyin Ojih Odutola (b. 1985, Nigeria/Lives and works in New York)
Toyin Ojih Odutola is an accomplished visual artist who creates drawings that utilize a variety of media. With any given tool, she emphasizes how an image is a striated terrain to mine beyond representation.

Mimi Plange (b. 1978, Ghana/Lives and works in New York)
Mimi Plange is a widely-acclaimed fashion designer who has received a host of accolades including Designer of the Year at the Mercedes-Benz Africa Fashion Week in South Africa (2012) and Mayor Michael Bloomberg’s Design Entrepreneurs Award in New York (2012). Her work has been featured in many publications including The New York Times, Women’s Wear Daily, Essence and Vogue UK.

Jessica Scott-Felder (b. 1981, United States/Lives and works in Spartanburg, South Carolina)
Jessica Scott-Felder is a multidisciplinary artist whose recent exhibitions include the A.I.R. Gallery in New York and a solo installation and performance exhibition at the Telfair Museum in Savannah, Georgia, in 2013.

Amy Sherald (b. 1973, United States/Lives and works in Baltimore, Maryland)
Amy Sherald’s portrait paintings and lush, high-keyed palettes have earned her critical acclaim. In 2016, she was awarded first prize in the Outwin Boochever Portrait Competition at the Smithsonian National Portrait Gallery.

Sophie Zinga (established in 2012, Dakar, Senegal)
Sophie Zinga is a fashion brand that reflects the minimal graphic and design sensibilities of its founder, designer Sophie Nzinga Sy, as well as her passion for art, travel and the multiple cultures that shape and inform her life.

Brenna Youngblood (b. 1979, United States/Lives and works in Los Angeles)
Brenna Youngblood is a painter who creates paintings and photo collage, her favored medium, to explore and reflect the multicultural layers of meaning in the "City of Angels."

Billie Zangewa (b. 1973, South Africa/Lives and works in Johannesburg, South Africa)
Billie Zangewa, an artist who has had an extensive history in fashion and advertising, is internationally acclaimed for her multi-layered cut silk tapestries.

A host of exhibition-related programs are slated for September through December 2016 including Yoga in the Museum, a panel discussion with artists, Community Conversations, film-screenings and much more.

ABOUT THE CURATORS
Andrea Barnwell Brownlee, Ph.D., an art historian, curator, writer, critic, and recipient of the prestigious 2013 David C. Driskell Prize in African American Art and Art History, has been the director of the Spelman College Museum of Fine Art since 2001. She has curated and co-curated numerous exhibitions including "iona rozeal brown: a³ . . . black on both sides" (2004), "María Magdalena Campos-Pons: Dreaming of an Island (2008)," "Undercover: Performing and Transforming Black Female Identities" (2009), "IngridMwangiRobertHutter: Constant Triumph" (2011), "Maren Hassinger. . .Dreaming" (2014) and "Howardena Pindell" (2015). "Cinema Remixed & Reloaded: Black Women Artists and the Moving Image Since 1970" (2007), which she co-curated with Valerie Cassel Oliver, senior curator, Contemporary Arts Museum Houston, was presented in the Havena Bienial in Havana, Cuba in 2012. Brownlee is the recipient of numerous academic, professional and scholarly awards including a MacArthur Curatorial Fellowship in the Department of Modern and Contemporary Art at The Art Institute of Chicago (1998 – 2000), a Future Women Leadership Award from ArtTable (2005) and the inaugural Nexus Award from the Atlanta Contemporary Arts Center (2010). Brownlee, an alumna of Spelman College, earned her Ph.D. in Art History from Duke University.

Erika Dalya Massaquoi, Ph.D., is a curator, educator and entrepreneur. Her brand, The Oula Company blends modern, global style and social responsibility. Her research interests are African and diaspora art, fashion and new and emergent media. Massaquoi’s current curatorial work includes "DISGUISE: Masks and Contemporary African Art, " Seattle Art Museum (2015), The Fowler Museum at UCLA (2015 – 2016), Brooklyn Museum (2016) and GENIUS, Frye Art Museum (2015 – 2016). As the former assistant dean of the School of Art & Design at The Fashion Institute of Technology in New York City, she organized numerous fashion-oriented exhibitions (2008 – 2012). She has held curatorial positions at the Whitney Museum of American Art and the Museum of the Moving Image. Massaquoi received undergraduate and graduate degrees from the University of Chicago and her Ph.D. from New York University in 2004. Her thesis exhibition, "Race In Digital Space," originated at the Massachusetts Institute of Technology (MIT) List Visual Arts Center (2001) and traveled to the Studio Museum in Harlem (2002) and the Spelman College Museum of Fine Art (2002). Massaquoi has taught new media, cinema and contemporary art classes at Yale University, New York University and The New School for Social Research.

In “Six Reasons to Love Atlanta,” CNN.com praised the Spelman College Museum of Fine Art for its “fantastically curated exhibitions” that focus on art by and about women of the African Diaspora. Since the Museum opened in 1996, it has established an impressive track record for organizing first-rate, mission-specific, art exhibitions that expand art offerings in Atlanta and the southeast region. It has garnered a reputation for organizing exhibitions that merit national and international attention. Milestones include being selected as the first institution from the United States that jointly (along with the Contemporary Arts Museum Houston) represented the United States at the 2012 Havana Biennial in Havana, Cuba. The Museum is poised to continue its trajectory of pursuing ambitious relevant projects that have a lasting impact. For more information visit museum.spelman.edu. 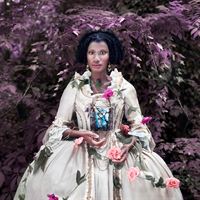