ATLANTA (Dec. 22, 2015) -- The Spelman College Museum of Fine Art will present Black Chronicles II, an exhibition which explores the Black presence in late 19th century Victorian Britain through the prism of studio portraiture. Curated by Renée Mussai and Mark Sealy of London-based arts agency Autograph ABP, the stunning mix of rare and mostly never-seen images depicts both ordinary and prominent citizens—including artists, dignitaries, servicemen and women, missionaries, students, performers and international royalty—captured in portraits by professional photographers. The exhibition, which makes its Southeast debut at Spelman before it returns to London, will be on view Jan. 29-May 14, 2016.

Developed through original research in the holdings of national archives and several private collections in the United Kingdom and in collaboration with the Hulton Archive, a division of Getty Images, the exhibition includes more than 100 photographs taken in commercial studios across Britain during the Victorian era. The invention of photography in 1839 and the gaining popularity of portraits introduced a powerful way to capture a sitter's likeness and mood. However, Black people in Britain are generally absent from early photographic histories. By excavating the Hulton Archive, Black Chronicles II identifies an intriguing selection of photographs—a majority seen for the first time in public—to redress the question of “absence” in Britain’s historical and visual records.

The exhibition’s focus is a newly rediscovered body of photographic portraits from the Hulton Archive’s London Stereoscopic Company collection, including a series of more than 30 portraits of The African Choir, which toured Britain between 1891 and 1893. Buried deep in the archives for decades, these images are presented with a carefully curated selection of original albumen cartes-de-visite (calling cards) that became popular collectibles in the late 19th century.

Alongside portraits of unidentified subjects, the exhibition features well-known period personalities with extraordinary stories, such as Sarah Forbes Bonetta, brought to England from West Africa and “god-daughter” to Queen Victoria; Prince Alemayehu of Ethiopia, who was taken to Britain as a young boy after his father committed suicide following defeat by the British; international boxing champion Peter Jackson a.k.a. “The Black Prince” from the island of St. Croix; and Kalulu, the African “boy servant” of British explorer Henry Morton Stanley, who inspired Stanley’s 1873 book My Kalulu, Prince, King and Slave: A Story of Central Africa. Together, the visual presence of these sitters bears direct witness to their own personal narratives, the complexities of colonial and imperial history, and the expansion of the British Empire.

“Black Chronicles II makes the archive, which is often viewed as a static place for researching the past, come alive,” said Andrea Barnwell Brownlee, Ph.D., C'93, director of the Spelman College Museum of Fine Art. “While the Black subjects in the portraits hail from the Victorian era, it provokes a variety of pressing discussions about tracing our ancestry, maintaining family albums, the various ways that photographs continue to shape views about race, and the under-considered relationship between photographers and sitters. The Museum is privileged to present this important internationally touring exhibition.”

The Museum is organizing workshops, gallery walks, Community Conversations, lectures and other programs in collaboration with academic departments, community groups and arts organizations. These public programs will examine and explore important themes including the importance of excavating hidden histories, the significance of the archive, and the active role that images play in shaping contemporary discourse on race and equality.

Autograph ABP Curator and Head of Archive Renée Mussai, who led on the research and curation of Black Chronicles II, said the collection discredits the notion that Black faces in Victorian Britain were absent from the historical and visual record. Mussai added the exhibition’s premise is to “open up critical inquiry into the archive and continue our mission of continuously writing Black photographic history. At the heart of the exhibition is the desire to resurrect Black figures from oblivion and re-introduce them into contemporary consciousness.”

Black Chronicles II is dedicated to the memory of Stuart Hall (1932 – 2014), the late cultural theorist and former Autograph ABP chairman. Mussai and co-curator Mark Sealy, director of Autograph ABP, have used Hall’s influential work on Black identity in Britain to drive the exploration of the exhibition’s narrative. The exhibition features text and audio excerpts from Hall’s seminal 2008 keynote speech on archives and cultural memory.

“Black Chronicles II is a stunning exhibition and the fact that the majority of the negatives unearthed from within the Hulton Archive have lain undisturbed, bound in brown paper and string for over 120 years, is truly extraordinary,” said Matthew Butson, vice president of the Hulton Archive.

Spelman College Museum of Fine Art’s presentation of Black Chronicles II is made possible by the Wish Foundation and the LUBO Fund. Atlanta Celebrates Photography is a supporting partner.

Lecture and Opening Reception
On Friday, Jan. 29, 2016, at 6:30 p.m., Autograph ABP Curator and Head of Archive Renée Mussai will present an illustrated lecture on these recently discovered photographs, the majority of which have not been published or presented to the public until now. A reception will follow. This event is free and open to the public.

INTERACT WITH THE MUSEUM
To interact with the Museum and its community, learn more about the College’s art collection, and receive the latest Museum news and exclusives, follow the Museum on facebook.com/spelmanmuseum and twitter.com/spelmanmuseum. Museum visitors are encouraged to check in on foursquare.

ADDRESS
The Spelman College Museum of Fine Art is located in the Atlanta University Center on the Spelman College campus on the first floor of the Camille Olivia Hanks Cosby, Ed.D. Academic Center at 350 Spelman Lane, S.W., Atlanta, Ga. 30314.

About Spelman College Museum of Fine Art
In “Six Reasons to Love Atlanta,” CNN.com praised the Spelman College Museum of Fine Art for its “fantastically curated exhibitions” that focus on art by and about women of the African Diaspora. Since the Museum opened in 1996, it has established an impressive track record for organizing first-rate, mission-specific, art exhibitions that expand art offerings in Atlanta and the southeast region. It has garnered a reputation for organizing exhibitions that merit national and international attention. Milestones include being selected as the first institution from the United States that jointly (along with the Contemporary Arts Museum Houston) represented the United States at the 2012 Havana Biennial in Havana, Cuba. The Museum is poised to continue its trajectory of pursuing ambitious relevant projects that have a lasting impact.

About Autograph ABP
Established in 1988 with the mission of advocating the inclusion of historically marginalized photographic practices, Autograph ABP is a charitable arts agency that works internationally in photography and film, cultural identity, race, representation and human rights. In 2007, the organization opened Rivington Place, an architectural landmark designed by David Adjaye, as a new center for diversity in the visual arts and photography. For more information, visit www.autograph-abp.co.uk.

About Hulton Archive
Hulton Archive, a division of Getty Images, situated in Westbourne Park, London, is a major visual resource and home to more than 80 million images. One of the oldest and largest archives in the world, its content is drawn from nearly 1,500 individual collections. Hulton Archive offers a wealth of original and unique photographic material, from the birth of photography to the present day alongside engravings, maps, cartoons, etchings, lithographs, illustrations, and other visual ephemera. Getty Images is the leading provider of digital media within the image- and video-licensing industry. For more information, visit www.gettyimages.co.uk/editorialimages/archival.

MEDIA NOTES:  Images and background materials from the exhibition are available, as well as advance interviews with the Spelman College Museum of Fine Art and Autograph ABP about the exhibition and its contents. If you would like an in-person preview viewing of Black Chronicles II and/or a guided walkthrough with exhibition officials, please contact Audrey Arthur, senior media strategist, at Spelman College, at aarthur3@spelman.edu or 404-270-5892. 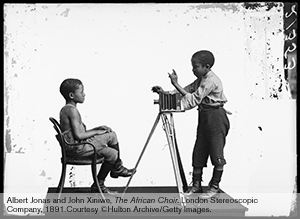