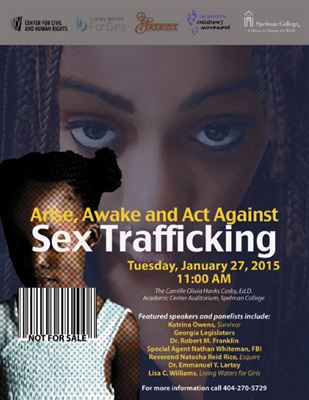 ATLANTA (Jan. 22, 2015) -- On Tuesday, Jan. 27, Spelman College Sisters Chapel, in collaboration with community partners the Center for Civil and Human Rights, Living Water for Girls, Ebenezer Baptist Church and the Interfaith Children’s Movement, will join forces to host “Arise, Awake and Act Against Sex Trafficking.”  This daylong conference is designed to ignite a passion in the Atlanta community to help save young girls and boys who are victimized by human trafficking and commercial sexual exploitation.

The conference will be held from 11 a.m. to 6 p.m. in the Camille Olivia Hanks Cosby, Ed.D., Academic Center Auditorium. Lunch is $5, and parking is $3 in the Spelman College parking deck.

The Rev. Lisa Rhodes, lead conference organizer and dean of Sisters Chapel, hopes the conference will help inspire moral outrage and a spirit of advocacy to combat an industry that generates nearly $32 billion dollars a year trafficking children as young as 12-years-old.

According to the Center for Public Policy Studies, Atlanta ranks among the U.S. cities with the highest rates of children used for prostitution, accounting for 100 juvenile girls who are exploited each night in Georgia.

“Through public forums like this conference, we intend to not only educate the faith community, students and civic leaders about the commercial sexual exploitation and victimization of our girls and boys, we also hope more Black churches and students will join the movement to take action against the perpetrators and buyers who sell  our children,” said Rev. Rhodes.

“We must support legislation that helps to protect our children from such evil. We must commit to advocacy and standing on the steps of the Capitol," Rev. Rhodes added. "We must write letters to legislators, speak out and preach in churches, and like we marched in Ferguson and in New York, we must also march here in the city of Atlanta and throughout the state of Georgia against sex trafficking.  This conference is a clarion call to all faith traditions, and serves as an interfaith effort to address this issue.”

In addition to several panel discussions, the conference will feature survivors of sex trafficking, state legislators, religious leaders, the FBI, and representatives from community organizations such as youthSpark. There will also be artistic expressions through spoken word and dance.

The Rev. Frank Brown, president of Concerned Black Clergy of Metro Atlanta Inc., and senior pastor of Mt. Olive Missionary Baptist Church, said the conference underscores the importance of educating the religious and lay communities about the devastating impact of sex trafficking.

“We’re working to engage the Black church and help the community understand why this issue is so important,” said Rev. Brown. “We want to provide men and women with the information to help them understand how this issue affects everyone in our community.”

National Center for Civil and Human Rights
The Center for Civil and Human Rights in downtown Atlanta is an engaging cultural attraction that connects the American Civil Rights Movement to today’s Global Human Rights Movements. The purpose is to create a safe space for visitors to explore the fundamental rights of all human beings so that they leave inspired and empowered to join the ongoing dialogue about human rights in their communities. The Center was first imagined by civil rights legends Evelyn Lowery and former United Nations Ambassador Andrew Young and was launched by former Mayor Shirley Franklin.

Living Water for Girls
Living Water for Girls is a residential and therapeutic program for young American girls victimized by human trafficking and commercial sexual exploitation.  Serving girls and young women ages 12 to 18, the organization’s mission is to rescue, rehabilitate and restore commercially sexually exploited girls.

Interfaith Children’s Movement
The Interfaith Children’s Movement is founded on the conviction that people of all faiths can, and must, work together — across boundaries of religious institutions and spiritual practices — to improve the lives and well-being of all children. ICM calls upon the thousands of faith communities to put their faith in action and bring their compassion and commitment to the fight against social inequities that threaten our children’s ability to realize their potential. Through its Faith in Action program, ICM focuses on eight work areas that affect the well-being of all children: Poverty, Education, Health Care, Juvenile Justice, Child Care/Child Protection, Parental Nurture, Child Advocacy (Public Policy) and Immigration. Out of these work areas, ICM advocates on behalf of Georgia’s children at the services level and at the policy level by engaging faith communities in servicing the needs of children and calling for justice.

Ebenezer Baptist Church
Ebenezer Baptist Church in Atlanta, Georgia was founded in 1886 during the Reconstruction Era in the South.  It was here, from the pulpit of the Heritage Sanctuary, that the Rev. Dr. Martin Luther King Jr. preached his ministry of nonviolence. Now, from the pulpit of the Horizon Sanctuary, senior pastor Raphael G. Warnock continues Ebenezer’s legacy as a church at the forefront of the fight for social justice. During this time of national distress and international conflict, he stands at the Rock and preaches that God will once again deliver the world through threats to voting rights, war, and unjust conditions that continue the cycle of poverty. 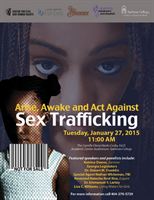