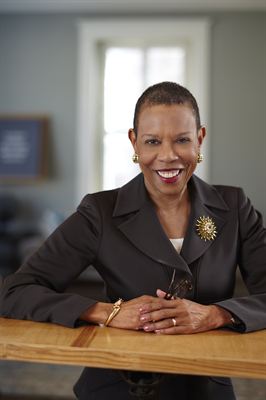 The inauguration theme of equality will be interwoven into four days of inaugural events, April 7-10

ATLANTA (March 4, 2016) -- Spelman College will begin a new chapter in its 135-year history when Mary Schmidt Campbell, Ph.D., is inaugurated 10th president during a formal investiture ceremony at 11 a.m., Saturday, April 9, at the Georgia World Congress Center in Atlanta. The inauguration theme of equality will be interwoven into four days of inaugural events (April 7-10), which will involve a convocation, campus celebration, faculty symposia, arts celebration, a Spike Lee retrospective, investiture and interfaith service.

Rosalind Gates Brewer, C'84, chair of the Spelman College Board of Trustees and Board Executive Committee, and president and CEO, Sam’s Club, will conduct the presidential inauguration. Guest speakers slated for the program include: Thelma Golden, director and chief curator, Studio Museum in Harlem; Freeman Hrabowski, president, University of Maryland, Baltimore County; Alfre Woodard, award-winning actress, and member of the U.S. President's Committee on the Arts and the Humanities; and Beverly Daniel Tatum, Ph.D., president emeritus, Spelman College.

Dr. Campbell assumed the helm of Spelman August 1, 2015, following an extensive national search led by the Board of Trustees. She succeeded Dr. Tatum, who was president from 2002-2015.

"Dr. Mary Schmidt Campbell is a visionary and an accomplished leader who is well prepared to move the mission of Spelman forward from a very broad global perspective," said Brewer. "We are pleased and excited she accepted the call to serve the College, which prepares women of the African Diaspora to excel academically and make a positive difference as agents of change around the world."

By focusing on equality as an inauguration theme, Dr. Campbell acknowledges its crucial role in today’s society. "For the past 135 years, Spelman has created a space where women could acquire the tools, skills and wisdom to close our country’s equality gap," she said. "Spelman has come through those years strong and healthy, and now leads the country in producing outstanding Black women in the fields of science, medicine, law, business, the arts and public service."

Prior to her appointment as president, Dr. Campbell was dean emerita of Tisch School of the Arts at New York University and University Professor in the Department of Art and Public Policy. She also served as New York City’s cultural affairs commissioner under two mayors. Dr. Campbell was appointed by President Barack Obama as the vice chair of the U.S. President’s Committee on the Arts and the Humanities, a non-partisan advisory committee to the president of the United States on cultural matters. Early in her career, she led the Studio Museum in Harlem.

Dr. Campbell holds a bachelor’s degree in English literature from Swarthmore College, a master’s degree in art history from Syracuse University, and a doctorate in humanities, also from Syracuse. She has received honorary degrees from The College of New Rochelle, Colgate University, City University of New York, Pace University, Maryland Institute College of Art and Swarthmore College and is the recipient of numerous awards and honors. She is currently a fellow of the American Academy of Arts and Sciences and sits on the board of The Alfred P. Sloan Foundation.

The following inauguration events are planned for the Spelman community and public:

A Spike Lee Retrospective: WAKE UP. WAKE UP. UP YOU WAKE.
*This is a ticketed event.*
Friday, April 8, 2016
7 p.m. - 8:30 p.m.
Spelman College, Sisters Chapel
350 Spelman Lane, Atlanta, GA
Celebrating equality through the eyes of a Spelman son

For more information about the inauguration of Dr. Mary Schmidt Campbell, visit www.spelman.edu/inauguration.