INSIDE INFORMATION: Speqta AB (publ) (”Speqta” or the “Company”) has today entered into an agreement with the owners of Eone OY (“Eone”), who owns Finland’s largest online brand within loan brokerage Rahalaitos.fi, to acquire 100 percent of the shares in Eone (the “Transaction” or the “Acquisition”). The total Upfront Consideration amounts to euro 23.5 million, plus an additional consideration of up to a maximum of euro 18.63 million based on Eone’s achieved EBITDA for 12 and 24 months, respectively, after closing. The consideration comprise a cash payment and a payment in shares in Speqta. The cash consideration will be paid through new senior bank debt facility of approximately EUR 11.75 million at a competitive interest rate and a directed new share issue of approximately SEK 100 million. Through the acquisition, Speqta attains a loan broker and broadens its offering within comparison sites and the finance vertical, while also strengthening its international reach, in particular in Finland. During the period from November 2018 to October 2019 Eone generated revenue and EBITDA of approximately SEK 149 million[1] and approximately SEK 56 million[1], respectively, and EBIT of approximately SEK 55 million[1].

[1]Currency rate of 10.6 EUR/SEK has been used for the conversion to SEK. Revenue, EBITDA and EBIT based on Eone management accounts reported in EUR. 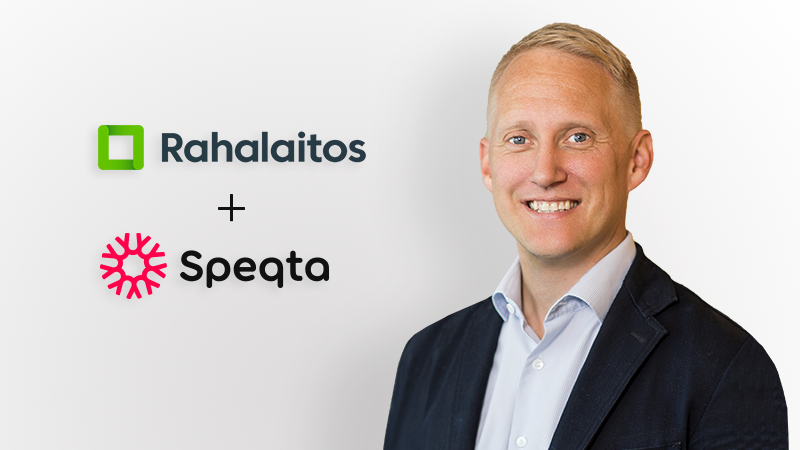 THE TRANSACTION IN BRIEF:

”The acquisition is in line with the strategy aiming at becoming a leading player within performance based marketing and the acquisition is transformative for us in several aspects. The acquisition will not only improve our financial position but also, by becoming a broker, Speqta will strengthen the Company’s position within the finance vertical and will complement the existing affiliate service. With the acquisition, Speqta will add extensive competence and a technical platform while establishing a market leading position within loan brokerage in Finland with Rahalaitos strong brand.”, says Fredrik Lindros, CEO at Speqta.

”It feels both exciting and good for Eone to have Speqta as a new owner with their competence within, for instance, lead- and customer generation. We look forward towards the next step in terms of growth and also to develop our business and future with Speqta as a listed company”. says Toni Heikkonen, CEO at Eone.

In the end of 2017, a shift in strategy was initiated to focus on performance based online marketing (lead generation). Growth should be organic as well as achieved through acquisitions and geographic expansion. The acquisition of Eone fits well into that strategy as the acquisition broadens the Company's offering within the finance vertical, and improves Speqta's position in Finland, and Eone's technical platform enables continued international expansion.

Speqta has entered into an agreement to acquire Eone OY who operates the market leading loan broker service Rahalaitos.fi with 13 employees. Rahalaitos has approximately 25 connected lending partners and is used by consumers and companies to simplify decision making by comparing loan offerings and present the most lucrative loan offerings. Through the acquisition, Speqta will more than double the consolidated revenue, and EBITDA will improve substantially and Speqta's cash flow will improve significantly.

The Acquisition is in line with Speqta’s focus within the finance vertical and expands the business geographically. Since Rahalaitos is a loan broker, thus having direct agreements with lending partners, the acquisition also allows Speqta to take a step forward in the value chain. A broker operating under a strong brand such as Rahalaitos benefits from the proprietary tech platform, and has API directly with the lending partners, a large customer database, recurring users which creates opportunities for favourable lead generation e.g. through SEO and SEM which Speqta has extensive experience from and can support Rahalaitos with. Speqta is already running several affiliate sites within the finance vertical through Affilijet, by collaborations with Expressen Låneguiden (lanapengar.expressen.se) and Nettavisen “Lånehjelpen” (nettavisen.no/forbrukslån, nettavisen.no/kredittkort) along with own sites such as Lånakuten.com and Låne-penger.com.

A preliminary unaudited combined balance sheet as of 30 September 2019 is presented below with the purpose of describing the Group’s financial position after the Transaction. The combined balance sheet is solely intended to describe the hypothetical situation of the new Group as if the Transaction had been completed as of 30 September 2019. Note that Eone thus far has had euro as its reporting currency. A currency rate of EUR/SEK 10.6 has been used for the conversion to SEK, which is Speqta's reporting currency.

Further information regarding the preliminary unaudited combined income statement and balance sheet with explanations on combined adjustments will be published on the Company’s website on 20 January 2020, together with an investor presentation that describes the Acquisition more thoroughly.

The Cash Consideration of euro 16.5 million, equivalent to SEK 174.9 million4, will be paid in cash and financed through proceeds from the Bank Financing and the Directed New Share Issue.

I connection with the Acquisition, a leading Nordic bank has, through a commitment letter, committed to issue a senior debt facility of euro 11.75 million at a competitive interest rate to finance a part of the Cash Consideration. The debt facility will have a maturity of 3.5 years. After the Acquisition, Speqta’s interest bearing bank debt will amount to approximately SEK 142 million.

Speqta’s Board of Directors has, based on the authorization from the Annual General Meeting held 13 May 2019, resolved to conduct the Directed New Share Issue.

Speqta will issue new shares equivalent to approximately SEK 100 million, to finance part of the Cash Consideration. Institutional investors have expressed an interest to subscribe for a total value that exceeds the size of the Directed New Share Issue. The final outcome of the Directed New Share Issue will be announced before the commencement of trading on Nasdaq First North Premier Growth Market on 21 January 2020.

In order to facilitate the delivery of the shares to investors in the Directed New Share Issue, certain shareholders will lend shares to Carnegie Investment Bank AB (publ). The shares will be returned after the shares issued have been registered with the Swedish Companies Registration Office (Sw. Bolagsverket), which is expected to take place around 31 January 2020.

In connection with completion of the Transaction, Speqta’s board is expected to, based on the authorization from the Annual General Meeting held 13 May 2019, resolve on a Non-Cash Issue to pay the Consideration Shares to the shareholders of Eone.

In total, Consideration Shares with a value of euro 7.0 million, equivalent to SEK 73.6 million3, will be transferred to the sellers of Eone. Following receipt of the Consideration Shares, Eone Group Oy will hold approximately 16 percent of the outstanding shares in Speqta5.

LOCK-UP PERIOD FOR THE SELLER AND EXISTING SHAREHOLDERS

Speqta’s total costs for the Transaction, including costs for Carnegie Investment Bank AB (publ), bank financing and legal advisors, are estimated to amount to approximately SEK 13 million. In addition, costs related to a certain Finnish tax on share transfers of 1.6 percent of the purchase price, which corresponds to approximately SEK 4 million. All costs will be accounted for during the first quarter of 2020.

Before entering into the Transaction agreement, Speqta has together with its advisors conducted a limited due diligence of certain business, financial and legal information relating to Eone.

CONFERENCE CALL FOR INVESTORS, ANALYSTS AND THE MEDIA

Representatives of Speqta will participate in a conference call on 21 January 2020 kl. 13:00 CET in order to further describe the Acquisition. For further information, please visit Speqta’s webpage (www.speqta.se).

Eone is a fintech company in Finland that offers a marketplace for loan providers. The technology is used to connect consumers and loan proivders. https://www.eone.fi/

This announcement is not a prospectus for the purposes of Regulation (EU) 2017/1129 (the "Prospectus Regulation") and has not been approved by any regulatory authority in any jurisdiction. Speqta has not authorized any offer to the public of shares or other securities in any member state of the EEA and no prospectus has been or will be prepared in connection with the Directed New Share Issue. In any EEA Member State, this communication is only addressed to and is only directed at qualified investors in that Member State within the meaning of the Prospectus Regulation.

Solely for the purposes of the product governance requirements contained within: (a) EU Directive 2014/65/EU on markets in financial instruments, as amended (“MiFID II”); (b) Articles 9 and 10 of Commission Delegated Directive (EU) 2017/593 supplementing MiFID II; and (c) local implementing measures (together, the “MiFID II Product Governance Requirements”), and disclaiming all and any liability, whether arising in tort, contract or otherwise, which any “manufacturer” (for the purposes of the MiFID II Product Governance Requirements) may otherwise have with respect thereto, the shares in Speqta have been subject to a product approval process, which has determined that such shares are: (i) compatible with an end target market of retail investors and investors who meet the criteria of professional clients and eligible counterparties, each as defined in MiFID II; and (ii) eligible for distribution through all distribution channels as are permitted by MiFID II (the “Target Market Assessment”). Notwithstanding the Target Market Assessment, Distributors should note that: the price of the shares in Speqta may decline and investors could lose all or part of their investment; the shares in Speqta offer no guaranteed income and no capital protection; and an investment in the shares in Speqta is compatible only with investors who do not need a guaranteed income or capital protection, who (either alone or in conjunction with an appropriate financial or other adviser) are capable of evaluating the merits and risks of such an investment and who have sufficient resources to be able to bear any losses that may result therefrom. The Target Market Assessment is without prejudice to the requirements of any contractual, legal or regulatory selling restrictions in relation to the Directed New Share Issue.

For the avoidance of doubt, the Target Market Assessment does not constitute: (a) an assessment of suitability or appropriateness for the purposes of MiFID II; or (b) a recommendation to any investor or group of investors to invest in, or purchase, or take any other action whatsoever with respect to the shares in Speqta.

Each distributor is responsible for undertaking its own target market assessment in respect of the shares in Speqta and determining appropriate distribution channels.

1Currency rate of 10.6 EUR/SEK has been used for the conversion to SEK.

2Currency rate of 10.6 EUR/SEK has been used for the conversion to SEK.

3Currency rate of 10.51 EUR/SEK has been used for the conversion to SEK.

4Currency rate of 10.6 EUR/SEK has been used for the conversion to SEK.