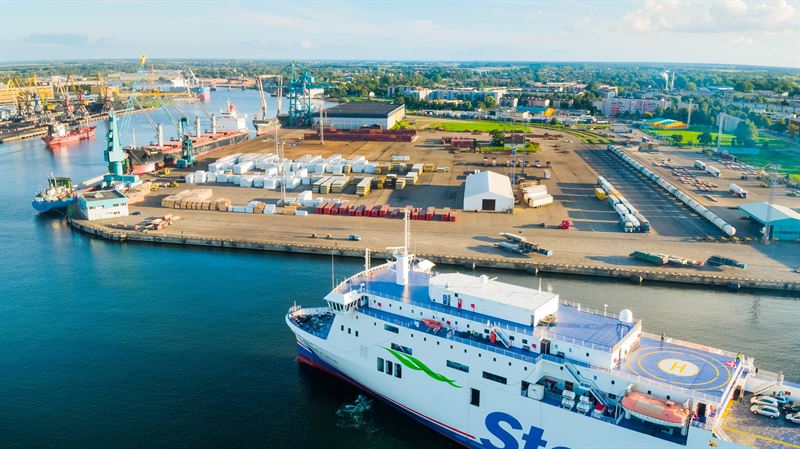 Stena Line and Noord Natie Ventspils Terminals (NNVT) have signed a 20 year contract securing the continuous ferry operation from the Freeport of Ventspils in Latvia. This long-term agreement is an important part of Stena Lines expansion in the Baltic Sea and the route between Ventspils and Nynäshamn in Sweden. During 2021 two large modern RoPax vessels will start operating on the route increasing the freight capacity with 30 %.

Stena Line started operating the ferry route between Ventspils and Nynäshamn in 2012. Since then the operation has more than doubled from 1 vessel and 10 departures per week to 2 vessels and 24 departures per week. Recently Stena Line announced an expansion on the route with the deployment of two large modern RoPax vessels during 2021, increasing the freight capacity on the route with 30 %. The new vessels, Stena Scandica and Stena Baltica, will also offer a modern onboard experience for travel passengers. The vessels will also be fitted with sustainable features such as hybrid scrubbers and ballast water cleaning systems as well as several fuel efficiency improvements.

Stena Line is expecting to increase both freight and passenger volumes going forward, and recently moved the operation in Nynäshamn to the newly built modern roro-terminal at Stockholm Norvik Port.

Stena Line and Noord Natie Ventspils Terminals (NNVT) have now signed a long-term 20 year contract securing the continuous ferry operation by Stena Line from the Freeport of Ventspils in Latvia. The agreement includes joint investments in the terminal area to cater for current and future tonnage needs on Ventspils-Nynäshamn, the shortest ferry route between the Baltics and Sweden.

“Ventpils offers a great geographical location, connecting Scandinavia with the Baltics, Russia and the CIS countries. This long term agreement is an important step in our continuous expansion in the Baltic Sea and enables us to continue to grow together with our customers and partners. It really show Stena Lines commitment to our Latvian routes”, says Johan Edelman, Trade Director Stena Line Baltic Sea North.

“The terminal with its long-term experience has proven itself as a reliable partner in the field of ro-ro cargo handling. Now our cooperation with the ferry operator Stena Line has reached a new milestone. Improvements to the terminal's infrastructure and larger vessels will make it possible to attract new volumes of cargo and passengers in upcoming future”, says Aivars Gobiņš Member of the Board, Noord Natie Ventspils Terminals.

“Announcement of the Stena Line development plans in Ventspils for at least another 20 years is a positive message not only for freeport of Ventspils, where the Stena Line logo has become an integral part of the port landscape and cargo flow, but also for industrial sector of Latvia and neighbouring countries.  Safe and convenient export gateway is of great importance for development of economic ties between the Baltics and Scandinavia”, says Andris Purmalis, CEO of the Freeport of Ventspils Authority.


Stena Line´s Baltic Sea operation on the routes Ventspils (Latvia) - Nynäshamn (Sweden) and Liepaja (Latvia) - Travemünde (Germany) is managed by Stena Rederi A/S, a consolidation of Stena AB’s Danish ferry and shipping activities in Hellerup. Stena Line is one of Europe's leading ferry companies with 37 vessels and 17 routes in Northern Europe. Stena Line is part of the Stena AB Group, which has about 16 000 employees and an annual turnover of around 37 billion SEK.