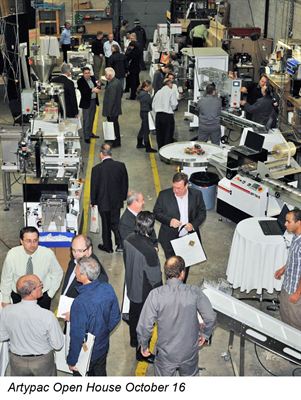 Erie, PA --- Eriez® was one of seven selected industry partners invited to exhibit at the October 16 Artypac Automation Open House, which served as an in-house trade show. Artypac began a partnership with Eriez a year ago to incorporate Eriez state-of-the-art metal detection technology into their innovative foodservice packaging machinery systems.

More than 100 Artypac customers attended the day-long event, which took place at the company’s Quebec facility.
“Rather than conducting the event as a traditional open house, we created a unique in-house trade show setting that allowed our top industry partners to demonstrate their exceptional products and services,” explains Richard Gareau, Artypac Sales Director.

Eriez’ display featured the company’s E-Z Tec® DSP Metal Detectors, X-Rays and a variety of separation and vibratory equipment. “We are so honored and grateful to have had the chance to participate in this top-notch event,” says John Klinge, Eriez Product Manager—Metal Detection. “This was an amazing opportunity to highlight our inspection technology, provide on-site training and network with Artypac’s team and customers.”

Since the inception of the Eriez/Artypac partnership just over a year ago, Eriez E-Z Tec DSP Metal Detectors have been integrated into many custom Artypac packaging machinery systems. “All these installations have proven incredibly successful,” says Gareau. “Our customers demand the most cutting-edge metal detection technology in their systems. Our partnership with Eriez enables us to deliver on these expectations.”

Gareau explains that Artypac chose to partner with Eriez for a variety of reasons. “We were familiar with Eriez’ stellar reputation and they came highly recommended. As soon as we began discussions about a potential partnership, it was evident this was a great fit. Eriez technology is unmatched and they are a trustworthy company.” He adds, “It’s a real bonus that Eriez has a local Montreal sales representative in Warco Process Technologies.”

“Artypac is known around the world for their superior packaging machinery systems,” says Klinge. “We are extremely proud that Artypac selected Eriez as their metal detection equipment supplier and look forward to maintaining and growing this relationship for many years to come.”

Stevens Strategic Communications was founded in 1973 as Baron Advertising and was renamed Stevens Baron Communication in 1999. Since our founding, we have been providing quality public relations, advertising, corporate and crisis communications work for our clients. Our award-winning staff provides services such as integrated marketing communications, direct response, special events, Web site development, research and measurement, media training and investor relations. 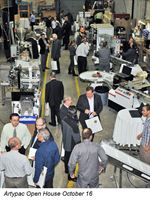