UNESCO created an international consortium called "TecLin" - Linguistic Technologies which brings together international experts in technological innovation in order to prepare the arrival of the internet 3.0: the "Semantic Web". It will be the Internet of computers with the power to contemplate and understand human thinking.

As Web 2.0 generated a technological breakthrough by providing interactivity among people, Web 3.0 will do something similar with machines and software that interpret human behavior.

This will allow, for example, more efficient searches, intelligent applications and real-time conversations in different languages. This will accelerate many aspects of human evolution since international trade (and jobs creation), cure and treatment of diseases, preservation of biodiversity and even colonization of Mars. It will also pass by an increase of efficiency of government services and development of democracy at global level.

The project is called UNESCO Chair on Language Technologies (TecLin). Its aim is to develop new technologies and use them for cultural preservation and heritage of humanity. The TecLin Consortium conducted its annual meeting in Florianopolis (Brazil) from October 25th to 29th, 2016 in order to discuss reports and advances in research, combining internal meetings with public presentation.

The Chair is coordinated and hosted by the Polytechnic University of Madrid, Spain. It is formed by other three co-founding members: the Catholic University of Temuco (Chile), the i3G Institute (Brazil) and the Private Technological University of Loja (Ecuador). The first phase is focused on the development of technologies for the recovery and preservation of rare languages.

The ILS works with the following languages: Guarani, Maya, Aymara, Kichwua Navajo-Apache and Aztec-Nahuatl. For instance, when the Internet user enters the word "ciudad" the related meanings are presented in the following 6 languages.

The aim of the project is to promote cultural preservation through technical and scientific development, approaching the academy to the business environment. ILS technology is an example provided by the company Synaption. The company released the Multisearch through the Brazilian center of TecLin Consortium, and also funds the maintenance and hosting tool.

International experts who have been to Florianopolis:

Along with the TecLin Consortium meeting was carried out the VI CONeGOV - eGovernment Conference, which had as its theme "Engineering Linguistics for Governments." The meetings were coordinated by PhD. Tania Bueno, scientist cited in Who'sWho in Science & Technology and coordinator of the UNESCO Chair in Brazil. According to Bueno´s "is fundamental that research use cutting-edge technology products”. The general coordination of TecLin Consortium is conducted by Jesus Cardeñosa, PhD from the University of Madrid. 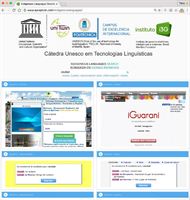