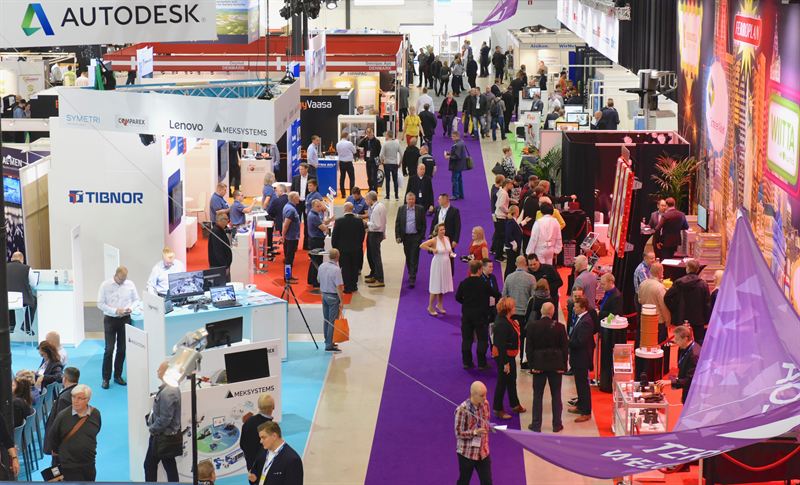 Visitors to the Subcontracting Trade Fair, held in Tampere last week, numbered 17,684. The trade fair had exhibitors from 20 countries. The next Subcontracting Trade Fair will be held on 25–27 September 2018, which will also mark the 30th anniversary of the event. Subcontracting 2018 will focus on productivity developments in manufacturing. AlihankintaHEAT, an event that highlights start-up companies, will be held next year as well and play an increasingly important role in the trade fair. Next autumn, the trade fair will also be visited by participants of the IFPSM World Summit 2018.

“It was nice to see the smiles on people’s faces, and I couldn’t help noticing how the weight of the long downward slump has lifted off their shoulders. The exhibitors and visitors were in good moods, and the atmosphere conveyed confidence in the future of the industry. I could also hear several different languages being spoken among the crowd. The interest in the event shown by international visitors is an indication of the interest that the Finnish market and industrial sector attract overseas. The Subcontracting Trade Fair turns 30 next year. At next year’s event, we’ll be looking back at the amazing improvements in productivity that our subcontractors have achieved. Rather than just gazing at the rear-view mirror, however, we will focus on the issues that will help the entire manufacturing sector of Finland to be successful over the next 30 years as well”, says Jani Maja, Product Group Manager at Tampere Trade Fairs.

“AlihankintaHEAT, which introduces start-up companies, included 17 start-ups and 14 partners. The event programme and contents were also advertised in HeatCorner, located in the main lobby. In the future, we want start-up companies to have an increasingly strong presence at the Subcontracting Trade Fair, so that the companies here will have the chance to familiarise themselves with new and agile operators and innovative operating methods. This was the second time we had arranged HEAT, and it provided us with a lot of ideas for the event’s further development, which will lead to major improvements next year,” says Tanja Järvensivu, Event and Communications Manager at Tampere Trade Fairs.

“This is the first time that I’m visiting Finland for business reasons; we’re here to promote small businesses. This fair you have here in Tampere is very impressive, because you have a great many stands here. And although there are, so far, no English companies represented, it’s only a question of time before that happens. There were so many varieties, whether it’s in medicine, aviation or automotive. You have the best examples of everything here, and that’s very inspiring”, said Prince Michael of Kent in an interview with Aamulehti. Aamulehti: Watch a video of the interview with Prince Michael of Kent.

For more videos and photos of the event and other media material, go to www.tampereenmessut.fi/materiaalipankki

Held since 1988, the Subcontracting Trade Fair showcases Finnish industry and its leading companies. The main partners of Tampere Trade Fairs are the Technology Industries of Finland association, the Rubber Manufacturers’ Association of Finland, the Finnish Plastics Industries Federation, and the Finnish Association of Purchasing and Logistics. AlihankintaHEAT is offered by Finland Events, the event unit of Tampere Trade Fairs, in cooperation with Rapid Action Group (RAG).