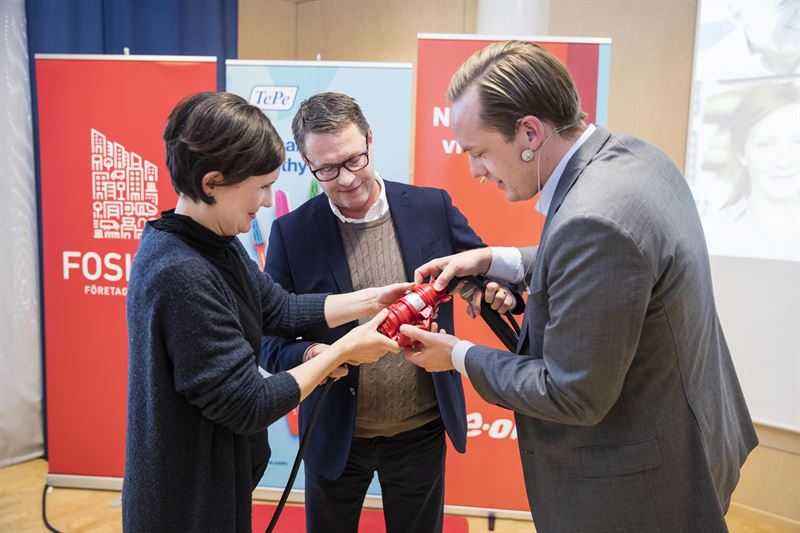 On 17 January, Malmö’s largest solar power plant was opened at TePe Munhygienprodukter AB. The plant, installed in collaboration with E.ON on the rooftop of a TePe factory building, enables the energy produced on site to be used directly in the manufacture. The plant was opened by Joel Eklund, CEO at TePe, Peter Jonsson, Head of Sustainable Urban Development at E.ON, and Märta Stenevi (MP), Municipal Commissioner for Urban Planning and Services.

955 solar panels with an estimated production of approximately 220,000 kWh/year were installed on a roof area of 2,600 square metres.

– We want to be a driving force in a long-term sustainable development and are proud to open Malmö’s largest solar power plant. Under favourable weather conditions, we will be able to manufacture Sweden's most purchased toothbrush solely on solar energy, says Joel Eklund, CEO at TePe.

The installation was made in collaboration with electric services company E.ON, that drives the transition to a sustainable society together with their customers.

– Our goal is that all the energy produced and delivered by us will be 100 % recycled or renewable by 2025. We are therefore very pleased with the collaboration with TePe, whose solar power plant is a good example of a customer solution that brings concrete environmental benefits, says Peter Jonsson, Head of Sustainable Urban Development at E.ON.

The investment in Malmö's largest solar power plant is also welcomed by the Municipality of Malmö.

– Malmö's environment programme contains ambitious goals, one of them being that 100 % of the energy serving the city is renewable by 2030. To achieve this, the Municipality and the business sector need to work together, and we see the solar energy initiative as a positive step in the joint efforts to make Malmö Sweden's most climate-smart city, says Märta Stenevi (MP), Municipal Commissioner for Urban Planning and Services.

Facts about the solar power plant

TePe Oral Hygiene Products is a Swedish company founded in 1965. The TePe range of interdental brushes, toothbrushes, and dental picks is developed in collaboration with dental experts with the aim of promoting good oral health. All design, development, and production take place at the headquarters in Malmö. The products are marketed by subsidiaries in eight countries and distributors in 80 countries, and available primarily through dental practices, pharmacies, and retail. TePe has 370 employees and turnover of MSEK 840 (2019).