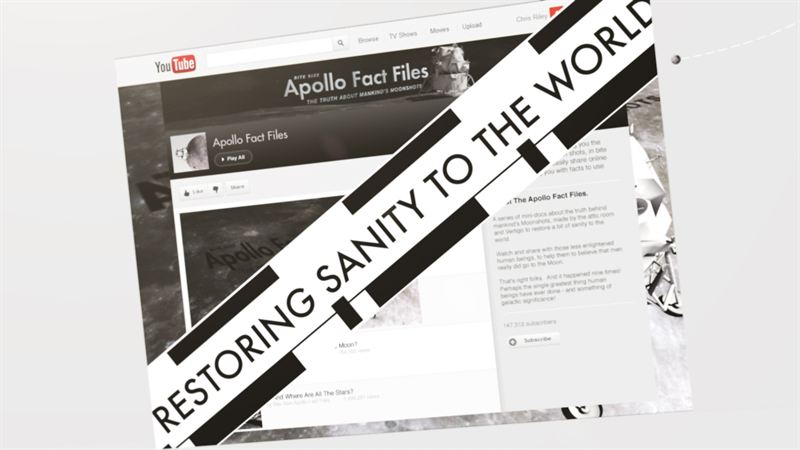 This Christmas it will be 45 years since the first astronauts reached lunar orbit, and yet conspiracy theories continue to question if the Moonshots ever really happened.

The first episode www.youtube.com/apollofactfiles of their Apollo Fact Files has recently been released and Riley is now launching a Kickstarter campaign: http://www.kickstarter.com/projects/theatticroom/apollo-fact-files-the-truth to raise £5000, which he will use to fund eleven more episodes.

Prof Chris Riley says: “Kickstarter is the ideal platform to raise funds and to inform users about this project. 400,000 brilliant and dedicated people were behind NASA's Apollo missions. They sent 24 humans to explore the Moon from 1968 to 1972. It’s incredible that rumors still try to dispel this. By producing a series of short animations, we hope people will be able to more easily learn why the conspiracy theories are wrong.”

Blending animation with archive footage, the episodes will be three minutes long and each one will aim to address a different lunar conspiracy topic, all of which will contain a very simple scientific or engineering explanation.

Antony Buonomo says: “Prof Chris Riley approached me to work on the project and I jumped at the chance. Animation is a great way of explaining the science behind Apollo in an engaging and entertaining way.  It would be wonderful to roll out a whole series of Apollo Fact Files as a result of the Kickstarter campaign.”

The Apollo Fact Files are easily understood and create a memorable sense of fun, which Prof Chris Riley hopes will encourage people to share with others.

The series is produced by The Attic Room, Prof Chris Riley’s London based production company which has received production support from YouTube’s UK Creator Space.

The Kickstarter campaign is aiming to raise £5k to make the next four episodes:

Episode 2. Where are all the stars?

Episode 3. What's up with those strange shadows?

Episode 4. How did the astronauts film themselves leaving the Moon?

Episode 5. Wouldn't radiation have killed the astronauts on their way to the Moon?

Should the campaign exceed its goal then even more episodes will be made, tackling some of the many other lunar conspiracy theories. Prof Chris Riley is hoping to attract funding from anyone who wants to help celebrate Mankind’s greatest technological achievement, and honour the 400,000 engineers and scientists who dreamed an impossible dream in the 1960s and then made it happen.

Episode one – on the flapping flags is already available to view at: www.youtube.com/apollofactfiles.

Contributions to funding the series can be made at: http://www.kickstarter.com/projects/theatticroom/apollo-fact-files-the-truth

Christopher Riley has made over 30 documentaries about the Apollo programme since the 1990s, including the multi-award winning 2007 film ‘In the Shadow of the Moon’, and the Grand REMI award winning TV series ‘Moon Machines’. He is author of both Haynes iconic owner’s workshop manuals on the Apollo hardware. He produced the 2009 director’s cut of the classic 1971 NASA Apollo feature documentary ‘Moonwalk One’. He is the visiting professor of science and media at the University of Lincoln. More details of Riley’s career can be read at www.chris-riley.net.

Founded in 2006, London based media production company The Attic Room produces films for TV, cinema and the web.  It made the hit 2011 film ‘First Orbit’, an innovative recreation of Yuri Gagarin’s pioneering space flight, shot on board the International Space Station. The film premiered on over 1600 screens in more than 130 countries for the 50th anniversary of the mission, and became the most watched long form film release in YouTube history at the time.  A new, crowd-funded version of the film was released in 2012 on DVD and BluRay, with subtitles in 30 languages – created by the film’s fans.

Other attic room projects can be found at  www.theatticroom.com

Antony Buonomo is an Emmy Award winning freelance motion graphics and VFX digital designer. He began his career at the BBC creating some of the corporation’s first web sites for ‘Tomorrow's World’ and ‘QED’ amongst others. He won his Emmy, and a Royal Television Society award in 2005 for design and special effects on Discovery Channel's ‘The Secret Plot To Kill Hitler’. He created the opening titles for the feature film ‘12 Years A Slave’, the 2010 film ‘Brighton Rock’, and the BBC’s ‘Blandings’, ‘The Proms’ (2011) and ‘The Fantastic Mr Feynman’ (2013).

Other work can be found at - www.vertigo.co.uk