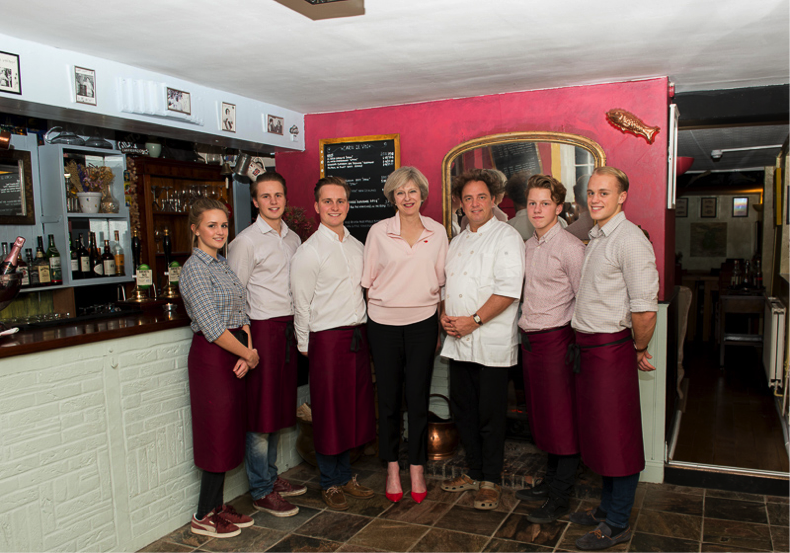 Diners at the Crown restaurant in Burchetts Green, Berkshire, had a surprise last Friday evening when the Prime Minister, Theresa May, together with her husband, Philip, dropped in for dinner and to congratulate Simon Bonwick and his family on their recent award of a Michelin star.

The Bonwick family, who started at The Crown three years ago, are proud of the fact that all the staff are family members - with father Simon the maestro in the kitchen, and his eldest son Dean running front of house, assisted by George, Adam, Charlie and sister India.

According to Simon Bonwick, who was previously a chef in private service, "We were absolutely delighted that the Prime Minister should think to visit and support us as we are only a small restaurant and we feel deeply honoured."

"Mrs May enjoyed our Sheringham Crab Meat with Apple, Citrus and Cashew as a starter, with Highland Beef Fillet ‘Steamed on String’ with a Very Fine Beef Sauce as a main course, followed by a selection of Fromagerie Cheese with Me Flapjack.”

Simon added, "I also learned that Mrs May is a keen cook herself - she was particularly interested in how I created my beef dish!"

Awarding the restaurant one of its coveted stars, Michelin noted the “refined, deftly prepared dishes” and “diverse and appealing options, with flavours clearly defined”.

The Crown Restaurant, which is open Wednesday - Sunday is to be found in the centre of Burchetts Green off the A4 between Knowl Hill and Maidenhead.

Further information regarding The Crown Inn can be found on their website www.thecrownburchettsgreen.com.