Plume to Publish Softcover Edition of Disconnect: The Truth About Cell Phone Radiation.... by Dr. Devra Davis on September 27

Few of the world’s five billion cell phone users question whether their phones are safe.  In fact, these devices are small microwave radios that can release harmful radiation.  In the United States, cell phone safety standards were set almost three decades ago, prior to the era of handheld wireless technology.  Those standards assume that the average cell phone call lasts less than six minutes and is made by a tall adult man. But today, many calls last much longer—and more than half are made by children under the age of 20, whose thinner skulls and more-fluid brains are more susceptible to harm from radiation.  The result?   Cell phones represent an ominous global threat to public health.

Now in softcover and featuring a new Afterword by author Devra Davis, PhD, MPH, Disconnect: The Truth About Cell Phone Radiation, What the Industry Is Doing to Hide It, and How to Protect Your Family (Plume; September 27, 2011; $16.00) provides a clear, compelling and comprehensive look at this issue.  One of the foremost experts in the field, Davis lucidly explains the science behind cell phone radiation, documents the outdated nature of U.S. government regulation, and uncovers the cell phone industry’s pattern of “war-gaming” scientific evidence of cellphone hazards

• The effects of cell phone radiation in the elderly, including higher risk of Alzheimer’s

In the new Afterword to Disconnect, Dr. Davis spotlights recent findings on the health risks of cell phone radiation, including the landmark ruling by the World Health Organization that radio frequency and electromagnetic radiation is a “possible” cause of brain cancer, and major efforts of other tech-savvy governments to promote cellphone safety.

Dr. Davis does not advocate giving up cell phones; she still uses them with a speakerphone or headset.  But as Disconnect plainly shows, it is time to start demanding safer cell phones from manufacturers and higher safety standards from U.S. regulators.  This is a landmark and indispensable book that no cell phone user—or parent of a cell phone user—can afford to ignore.

Environmental Health Trust (EHT) educates individuals, health professionals and communities about controllable environmental health risks and policy changes needed to reduce those risks. Current multi-media projects include: local and national campaigns to ban smoking and asbestos; working with international physician and worker safety groups to warn about the risks of inappropriate use of diagnostic radiation and cell phones, promoting research and awareness of environmental causes of breast cancer, and building environmental wellness programs in Wyoming and Pennsylvania to address the environmental impacts of energy development, the built environment and radon. EHT was created with the goal of promoting health and preventing disease one person, one community and one nation at a time. Capitalizing on growing public interest in Dr. Devra Lee Davis’s three popular books, When Smoke Ran Like Water, a National Book Award Finalist, The Secret History of the War on Cancer, and Disconnect--The Truth about Cell Phone Radiation, What Industry Has Done to Hide It and How to Protect Your Family, as well as recent documentary films, the foundation’s website offers clear, science-based information to prevent environmentally based disease and promote health, for the general public, children, and health professionals. For more information about getting involved in the numerous special projects spearheaded by the EHT, please log on to http://environmentalhealthtrust.org/. Please view our YouTube channel for more information. 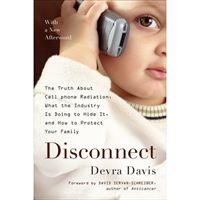