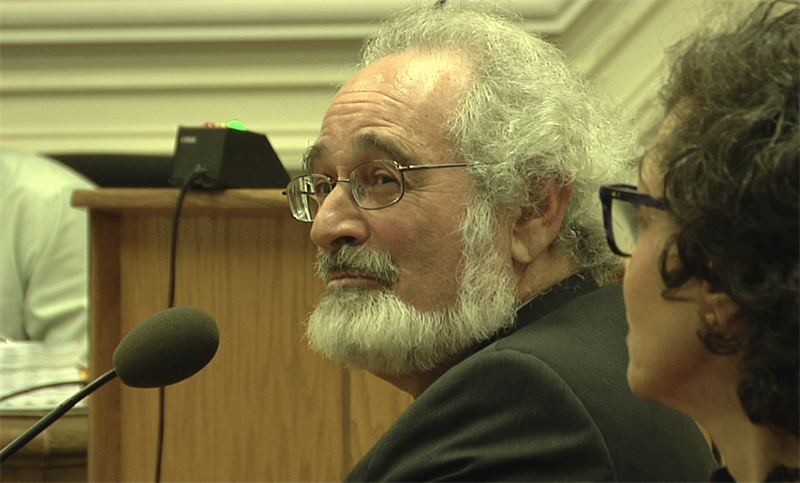 In urging that the City move ahead on this, Councilman Max Anderson noted “We know enough to tell people to be careful in how they use phones now.”

Earlier testimony provided by famed public health researchers, Prof. Stanton Glantz, of University of California San Francisco pointed out: “I think we are now at the same point in our understanding of cellphone health risks as we were with tobacco in the 1950s.  The science is not consistent, but there’s enough concern evident that it makes sense to take precautions.”

As part of its mission to foster public understanding about cell phone science, in testifying to city officials EHT addressed a number of important issues.

Question: Why worry about safety information, when cell phones are already 50 times lower in radiation intensity than they would need to be to cause any biological impact?

EHT Response: Because they are not.  The so-called “50-fold safety factor” applies only to base stations and not to cellphones and involves levels that are 50 times lower than those believed to heat up the body.  However, radiation from today’s cell phones can—and do—have both positive and negative biological impacts.  Controlled studies find that cellphone radiation can damage human sperm and brain cells.  The same type of radiation is approved for the purpose of treating liver and brain cancer.  (Learn more about these impacts of radiation here.)

Question: Why worry about cancer risk recently declared by the World Health Organization (WHO) since that group also thinks coffee and pickled vegetables causes cancer?

EHT Response: The caffeine example is misleading.  Like a number of chemotherapy agents that have both positive and negative impacts, high doses of caffeine slightly raise the risk of bladder cancer, while reducing that of colon and other tumors.

Founded on an exhaustive analysis, the WHO expert opinion about cellphone radiation rests on a simple and well-accepted public-health premise:  Every compound known to cause cancer in humans also produces it in animals when adequately studied. The goal of such assessments is not to prove harm, but to provide the grounds for policies that can prevent damage from unfolding.  How did preserved vegetables make the list?  In areas of rural China that lack refrigeration, extremely high levels of salts in preserved meats, fish and vegetables that form toxic compounds created devastating rates of digestive system cancers that can be reversed by avoiding these preservatives.

Question: Why worry when brain cancer rates are staying the same?

EHT Response: They are not.  (Learn more about increasing cancer here.)

EHT has recently reported in the British Medical Journal that incidence of brain tumors have risen in Norway, Finland and Australia—nations with longer-term, heavier cellphone use.  In populations exposed to brain carcinogens, such as the survivors of the bombings in Japan, the latency for brain tumors appears to be between three and four decades.  Leukemia cases were evident within a decade, but brain tumors did not emerge as a significant problem until nearly 40 years later.

What about other health concerns tied with cellphone radiation?

In fact, brain cancer is not the only health issue of concern linked to cell phone radiation, nor are cell phones the only source of radiofrequency and electromagnetic radiation.  Studies in rabbits and rats have shown that pulsed digital signals from today’s smartphones damage sperm, brain, liver, eyes and skin of exposed offspring, and impair their memory and behavior.  Offspring exposed to cellphone radiation throughout gestation tend to develop fewer and more damaged brain cells(Learn more about cancer and other health risks of cell phones here.

Why require posting information at point of sale when cell phone companies tell consumers the proper way to use their cell phones in their manuals?

Fine print warnings in packaging to keep phones away from the body are seldom read.  Consumers receive one message through industry advertisements featuring young children using cell phones as toys, and another in the cell phone manual itself, warning about keeping the phones a safe distance from the abdomen of teenagers and pregnant women.   Cell phone users only get to read about safer ways to use phones after purchasing the devices.  People have a right to know now what is in those fine-print warnings.  Cell phones kept in bras, pants or shirt pockets—as many people do today—can exceed current FCC exposure guidelines.

This essentially means that cell phone users may purchase a phone and upon reading the manual and the information regarding FCC exposure guidelines, be notified that the phone they have purchased cannot be optimally used in the ways most people use them today.  Had they known prior to purchase, they could have made better decisions.  Consumers should be empowered to make informed purchases that will ensure the longevity and versatility of the product they pay for.

How does this jibe with other nations efforts?

San Francisco’s advice to consumers is consistent with efforts already undertaken by the Israeli and French governments that promote safer use of cellphones and other wireless devices.  (For a worldwide directory of cell phone guidelines, please click here

Environmental Health Trust (EHT) conducts scientific research on controllable environmental health risks and works with individuals, public and private institutions about policy changes needed to reduce those risks. Current multi-media projects include: local and national campaigns to ban smoking and asbestos; working with international physician and worker safety groups to warn about the risks of inappropriate use of diagnostic radiation and cell phones, promoting research and awareness of environmental causes of breast cancer, and building environmental wellness programs in Wyoming and Pennsylvania to address the environmental impacts of energy development, the built environment and radon. EHT was created with the goal of promoting health and preventing disease one person, one community and one nation at a time. Capitalizing on growing public interest in Dr. Devra Lee Davis’s three popular books, When Smoke Ran Like Water, a National Book Award Finalist, The Secret History of the War on Cancer, and Disconnect--The Truth about Cell Phone Radiation, What Industry Has Done to Hide It and How to Protect Your Family, as well as recent documentary films, the foundation’s website offers clear, science-based information for the general public, children, and health professionals. For more information about getting involved in EHT’s numerous special projects, please log on to www.ehtrust.org.