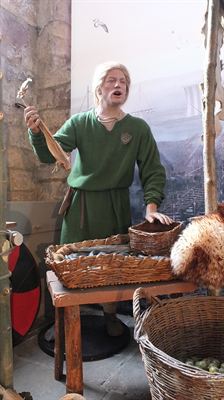 Being transformed into a Viking to join the permanent displays at JORVIK Viking Centre in York is one of the unique opportunities being offered to sponsors of the ‘Your JORVIK’ campaign, part of a fundraising initiative to help re-imagine the world-famous presentation of Viking-age York following last December’s devastating floods.

Whilst insurance will cover a like-for-like replacement of the displays – including a ride around a recreation of Viking-age Coppergate – within the centre, which was inundated with water last December, experts from York Archaeological Trust, who own JORVIK, are keen to push the Viking envelope further, using this opportunity to bring the unique attraction up to date with the latest discoveries and revelations about the city in the late 10thcentury.  This will include new Viking animatronics, and it is one of those that a lucky sponsor can influence.

“In our 2001 refurbishment, we invited Matt Baker – at the time when he was presenting Blue Peter – to be modelled for a mannequin, and for the last 15 years, visitors have spotted a blonde, long-haired version of Matt selling vegetables on Coppergate – and indeed, Matt’s Viking can currently be see in our new exhibition next-door to JORVIK in York St Mary’s.  When we re-open in Spring 2017, we’re hoping that we can include the face of a new sponsor on one of our state-of-the-art animatronics, carefully tweaked by our experts to ensure that it is an authentically Norse version of the 21stcentury face,” comments director of attractions, Sarah Maltby.

The model does not come cheap, with a price tag of £50,000 making it suitable for a committed and wealthy Viking enthusiast, but it is just one of the Your JORVIK crowdfunding project which aims to raise £500,000 towards the re-imagining of the attraction.  Other opportunities being offered to corporate sponsors and individuals range from sponsorship of the care and display of one of the unique Viking artefacts on display (£25,000) to a pocket-money friendly £2 to buy a piece of straw for the thatched roof of one of the houses on the recreated Viking street.

“As soon as the news broke of JORVIK’s flooding on 27 December, we started to receive donations from every corner of the globe, from children sending their pocket money to visitors for whom JORVIK changed their lives, planting the seed for careers in history or archaeology.  We’re hoping that Your JORVIK will give people the chance to see a real manifestation of their support, whether they fundraise as a school to sponsor an animatronic chicken, or are coached in Old Norse to provide the voice of one of the Vikings on the set!” adds Sarah.  “Even the infamous smells of Viking York can be sponsored – from the coal fire of the blacksmith to the unpleasant latrine!”

Your JORVIK forms part of #CampaignCanute, which was set up to receive donations immediately following the flooding, which saw the underground attraction under over one metre of water.  The campaign has already received support from celebrities including Brian Blessed, Dan Snow, the author of the Horrible Histories books, Terry Deary and historian, Michael Wood, who have all agreed to be Ambassadors for the campaign.

“We’ve been overwhelmed by the messages of support we’ve received over the last few months, and hope that we can continue to harness this support to ensure that JORVIK returns better than ever before,” says Sarah.  “Even today, 35 years after the Coppergate archaeological dig, we’re still learning new things about life in Viking-age York, so we’ve got a host of new stories to share with the next generation of Viking enthusiasts – now we just need the cash to bring it back to life.”

For more information on how to donate to #CampaignCanute or sponsorship opportunities for Your Jorvik, please visit www.jorvik-viking-centre.co.uk or call 01904 543400.