JORVIK Viking Centre: a blank canvas as work commences to rebuild and re-imagine the Viking city 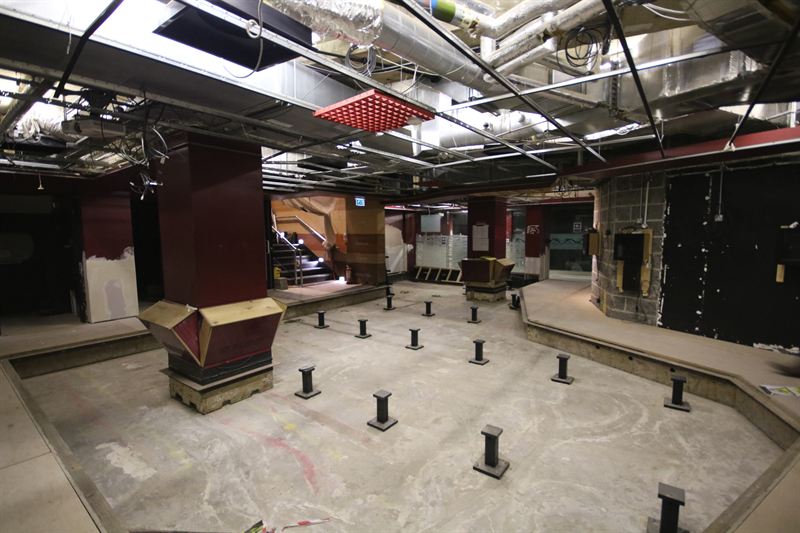 When water first started to seep into the lower level of the JORVIK Viking Centre on 27 December 2015, no-one would have predicted that seven months later, the basement which houses the world-famous Viking ride would be a stripped-out shell, but that is what was revealed today as the keys are handed over to the attraction’s designers to rebuild and re-imagine Viking-age York.

“So much of the city was back up and running within days of the floods, so visitors to York today can barely see any sign of the damage, but for JORVIK Viking Centre, there’s still an incredibly long way to go before we can once again open the doors to visitors,” comments Sarah Maltby, director of attractions for York Archaeological Trust, the charity which created JORVIK Viking Centre.  “The water inundated the recreated Viking wharf, so that has been entirely stripped out and has to be rebuilt from scratch – in fact, only the elevated Coppergate street scene remained without water damage, though it took months to dry out the space below which houses much of the technology and venting systems, and most of the items on the street had to be removed from the damp environment.”

Whilst the mechanism of the ride remained dry above water level, the sound system was damaged beyond repair, so new sounds and recordings will be created as part of the re-imagining of JORVIK.  Improvements in technology since the ride was completely redesigned in 2001 will help further update the visitor experience, although the recreation of the Viking city will not change too radically.

“The layout of the streets and wharf mirrors what we found when we excavated this site, and it is crucial that we maintain the authenticity of the experience, but we have learned more about the people of Jorvik and the day-to-day lives of its occupants, so this will be reflected in the new displays – with some surprises planned, too,” adds Sarah.  “The number of extra animatronics we can include will depend on our fundraising over the coming months – each extra animatronic person will cost around £50,000, but we know how much JORVIK means to millions of visitors who have experienced the sights and smells of Viking York, and we are incredibly grateful for the generous donations which will help reimagine Jorvik for the next generation of visitors.”

The street was not the only area to have suffered extensive damage; the galleries where priceless Viking artefacts were displayed were also flooded, although thanks to the hard work of the collections team, all artefacts were removed and stored safely before the water levels rose too high.  “One of our biggest challenges in displaying the artefacts found in Coppergate is maintaining correct environments so that the items do not degrade. We also want to make improvements to lighting and interpretation so that our visitors can better enjoy our collection,” adds Sarah.

The attraction has now been handed over to RMA, the company which was involved in both the initial creation of JORVIK Viking Centre and the refurbishments which have taken place over the last 33 years.  RMA’s work is expected to continue throughout the rest of 2016, with the newly built Viking attraction re-opening in Spring 2017.

The budget for the total project is £4.3m.  Insurance will cover around £2.8m, leaving a fundraising target of £1.5m.

The Trust has launched a fundraising programme, applying to Trusts and Foundations, public bodies, and other potentially supportive organisations; together with a public campaign ‘Campaign Canute’ to generate individual donations and support from local business.  To date around one third of the target funds have been raised.

Five ways to contribute to re-imagining the JORVIK Viking Centre:

The #CampaignCanute fundraising campaign to help re-imagine JORVIK Viking Centre is underway and already has support from many celebrities, including Brian Blessed, Terry Deary and Dan Snow.  However, there are plenty of ways that people can get involved:

York Archaeological Trust (YAT), (Reg. Charity No 509060), is a leading archaeological and educational organisation, known largely for the JORVIK Viking Centre; an award-winning accredited museum on the site of the excavations at Coppergate in the heart of York, which uncovered the Viking city. The Trust also owns and manages four other historic York-based attractions, a UK-wide programme of archaeological exploration and research and educational programmes and events in York and across the country, reaching over 500,000 people every year.

In Dec 2015 JORVIK Viking Centre was badly damaged by catastrophic flooding in York and remains closed for extensive repair and restoration.  YAT is developing a ‘Re-imagined’ JORVIK, which will open in spring 2017 and aims to build on strengths to date, providing a compelling, immersive experience of the past for the widest range of visitors of all ages, backgrounds drawn from local, regional communities plus national and international visitors.

The ‘Re-imagined’ museum attraction will build on JORVIK’s renowned strengths and track record to date, and include: innovative displays that are accessible for all; new technologies and interpretative techniques to deepen/enrich the content; an enhanced sensory experience; new animatronics and characters; re-displayed and interpreted artefact galleries; new research and discoveries working with experts in the field; and enhanced digital access.

Since it opened 32 years ago, JORVIK has: