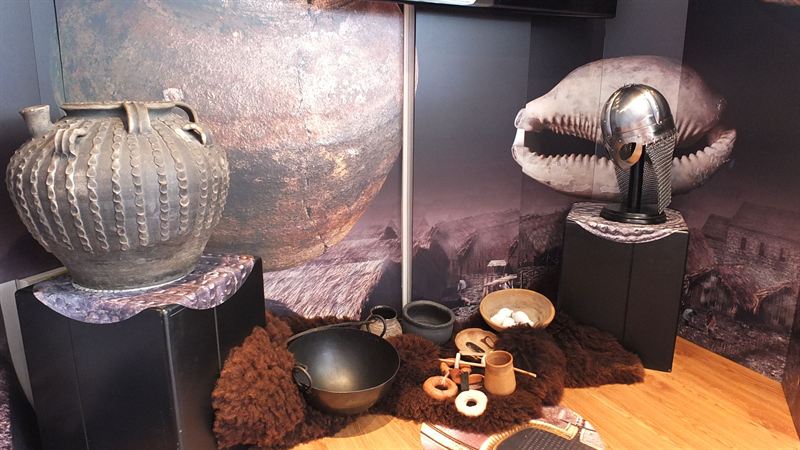 From 1976, the five-year archaeological dig at the site of the old Craven’s Sweet Factory – what we now know as the Coppergate Shopping Centre – was the first time people were able to watch truly ground-breaking Viking-age discoveries unearthed before their eyes.  This summer, to mark the 30th anniversary of the JORVIK Viking Centre, a special free exhibition will encourage people to recapture the excitement of the original dig at Coppergate Alive.

“Coppergate Alive is the visitor attraction equivalent of a prequel to the JORVIK Viking Centre,” comments Sarah Maltby, director of attractions for the organisation behind JORVIK, the York Archaeological Trust.  “Throughout the summer, we’ll have archaeological experts discussing and showing some of the items that were found during the Coppergate dig that never made it into the displays inside, from the shoes that they wore on their feet, to the wooden bowls and cups which gave Coppergate – the street of the cup makers – its name.”

Coppergate Alive! is hosted in a dedicated unit outside the JORVIK Viking Centre, but the anniversary celebrations continue all around Coppergate, with the very latest technology helping visitors to understand the scale of the archaeological dig.  Smartphone users and tablet users can scan special QR codes or tap NFC (Near Field Communcation) tags located all around the square, to virtually discover some of the artefacts found during the dig – from a working padlock to bone combs – in the ground beneath their feet.

“The generation of children that visited JORVIK when it first opened in 1984 may remember the news coverage about the long-running archaeological excavations, and probably the aromas used to immerse visitors in the sights, sounds and smells of the Viking-age, but we can now use technology to explain the scale of the dig to the next generation of visitors,” adds Sarah.  “Not only was this dig far bigger than the footprint of JORVIK Viking Centre, but the huge area excavated was just part of the far larger city of Jorvik – the Viking capital of England – which grew over 200 years as the Viking invaders settled on this fertile river bank.”

To make the Coppergate Alive! app fully accessible to visitors young and old, JORVIK Viking Centre is offering free wifi access to the online resources throughout the summer.  “With so many overseas visitors coming to see us, this means that they can enjoy the interactive app without incurring roaming charges – and this also means those with a tablet which requires wifi can enjoy the displays, too,” comments Sarah.

Coppergate Alive! runs from 5 July to the 31 August, open daily from 10.00am to 4.00pm, with the app available 24 hours a day.  “There has never been a better time to pop down to Coppergate, and with the new Carluccio’s now open in the square for the summer, too, Coppergate is once again the must-visit destination in York’s city centre,” adds Sarah.

For more information on visiting JORVIK Viking Centre during its anniversary year, please visit www.jorvik-viking-centre.co.uk or call 01904 615505 to pre-book tickets and avoid the summer queues.

About City-Insights, developer of the Coppergate Alive! App

City-Insights enables businesses to exploit the current mobile internet revolution.  Businesses and organisations in every sector are creating opportunities by engaging people via smartphone and tablet.  City-Insights offers a totally new way to create an experience for users in the place where they’re standing. They offer a simple way for businesses to be part of this trend.

City-Insights’ service works for anyone who needs to reach an audience in a specific place. The platform comes ready-to go with advanced multi-media tools designed specifically for location-based communication.

City-Insights has expertise in storytelling and way-finding which allows the company to develop multi-media content that delivers an unparalleled user experience.