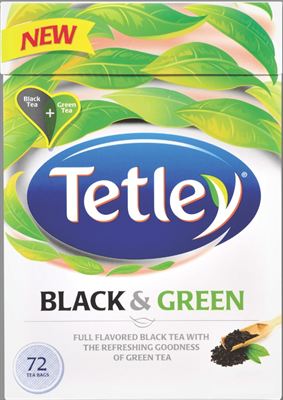 Tea is typically known as a relaxing good for you drink, but what has remained largely unknown, until now, is that those doing the drinking share an unexpected thirst for adventure. To celebrate the launch of its new Black & Green blend, Tetley USA commissioned a survey to look at the lives of tea drinkers nationwide, finding that compared to non-tea drinkers, those who enjoy a “cuppa” are more willing to try new activities, travel to new places, make time for exercise, and try new foods than their tea-averse counterparts. The Tetley “Simply Brilliant” survey also looked at Americans’ perceptions of brilliance among product innovations, companies and celebrities; only fitting as the brand brews up something brilliant of its own with its new Black & Green tea, a unique blend and a combination that until now has not been readily available in the US market.

The Tetley Black & Green “Simply Brilliant” survey found that tea drinkers are looking for the best of both worlds when it comes to life experiences and seem to be living more brilliant lives than their non-tea drinking counterparts:

“We have always known that tea drinkers are exceptional people, so we are excited to share this new data to support the brilliance we see in our consumers. We are also eager to share our own bit of brilliance with our new Black & Green blend,” said Marc Birnbaum, Marketing Executive at Tetley USA. “We have heard from consumers that they would like to drink more green tea for its renowned benefits, but aren’t always happy with the taste. With our new Black & Green blend, tea drinkers don’t have to compromise – they can enjoy the full flavor of black tea they love with the goodness of green tea they desire.”

The Tetley Black & Green “Simply Brilliant” survey didn’t just look at the lives of tea drinkers, but explored the state and perception of brilliance in America today.

-       Almost three in four (74%) Americans responding to the survey think that the U.S. is just as brilliant, if not more so, than other countries across the globe

When it comes to technology, almost two in five (36%) Americans think smartphones are the most brilliant technological development in recent history, beating other devices such as tablets (9%) and DVRs (6%). It may come as no surprise, then, that smartphone makers Microsoft (64%) and Apple (62%) tie for most brilliant brands, with online brands like Google – who just turned 15 – (51%) and Amazon (47%) following.

Advancements that make small but important tweaks to our appearances also have their own measure of brilliance. Survey respondents rate the most brilliant developments in the fashion and beauty world as:

-       Tom Hanks, just in time for his new “Captain Phillips” film premiere, came out as the top choice (26%) among survey respondents for best actor beating out:

-       One in three (33%) survey respondents feel that Meryl Streep is the most brilliant actress; around half as many (15%) place Anne Hathaway at a distant second

-       23% of Americans responding to this survey name tennis star Serena Williams today’s most brilliant athlete; she beats out several men at the top of their game, including LeBron James (15%) and Tom Brady (15%)

Tetley Black & Green blend will be available in a new premium flip-top 72-count box for a suggested retail price of $4.39. Tetley Black & Green will be on store shelves in major retailers nationwide in October 2013, as well as online at TetleyUSA.com.

Tetley has been known as an industry leader in creating a variety of delicious teas since it began producing tea over 170 years ago. Tetley is now part of Tata Global Beverages, which also includes award-winning Eight O¹Clock Coffee and Good Earth Tea. Tetley has a long-standing relationship with the Ethical Tea Partnership ­ an organization that drives change and helps create a thriving global tea sector that is socially just and environmentally sustainable. All Tetley branded tea, including flavored and decaffeinated varieties, will also be part of the Rainforest Alliance certification program, which is scheduled for completion by 2016. To learn more about Tetley Tea, visit www.TetleyUSA.com, become a fan on Facebook at www.facebook.com/TetleyUSA and/or follow @TetleyUSA on Twitter.

About the Tetley Simply Brilliant Survey

The Tetley Tea Simply Brilliant Survey was conducted online in September 2013 by Kelton, a global insights firm.  The survey sample was 1,000 nationally representative Americans age 18 and over, and the margin of error is +/- 3.1% at the 95 percent confidence level.