Incorporated in Autumn 1996, Troubador, the home of respected self-publishing imprint Matador, partnership publisher The Book Guild and The Self-Publishing Conference, celebrate two decades in business with a series of events and social promotions, culminating in a party for suppliers, friends, customers and staff on 23rd September 2016.

Founded by Jeremy Thompson, Troubador initially had an academic publishing focus, working for companies such as Elsevier, CUP and Wiley and launching their own journals in the computer science field (latterly sold to Emerald in 2008). In 1999, in a response to repeated requests from authors seeking assistance with their book projects, Jeremy and fellow director Jane Rowland launched Matador, the self-publishing imprint, which over subsequent years has grown into the most widely recommended and respected self-publishing company in the UK.

Over the years, Troubador has seen many changes in publishing – from the introduction of ebooks to the changing perception of indie and self-publishing, and is proud to have been at the forefront of raising the standard of self-published books in the UK – as well as being one of the first self-publishing firms to exhibit at the London Book Fair.

Since its inception, Troubador has grown from a staff of 2 to a staff of 24 with distribution, warehousing, ebook conversion, marketing, distribution and digital services, marketing, editorial, design and production all handled in-house for 600+ new books and ebooks a year.

In 2015 Troubador’s growth continued with the acquisition of The Book Guild, bringing an established name in partnership publishing to sit alongside Matador within the same publishing group. “We are delighted to celebrate twenty very successful years and look forward to many more years of self-publishing and distributing books to the high standards that we have become known for. We would like to thank all of the companies, past and present, that we have worked with, and all of the authors who have published with us over the last twenty years,” comments Jeremy Thompson.

“Troubador’s aims and ethos have not changed in the twenty years since its incorporation, but the company itself has grown with the support of a dedicated and talented staff and a wonderful community of authors. We very much look forward to more developments and more books as we move into our third publishing decade,” adds Operations Director, Jane Rowland.

• 1996: Troubador Publishing Ltd is founded.
• 1999: Matador, Troubador’s high-quality self-publishing imprint, is launched.
• 2008: Troubador sell their academic journals to Emerald and in 2009 move out of the academic market, to focus on indie- and self-publishing.
• 2006: Matador exhibit at the London Book fair for the first time (and have been there every year since).
• 2006: The Self-Publishing Magazine is launched.
• 2009: Book repping services are made available via Matador for self-published books for the first time in the UK.
• 2012: The first Self-Publishing Conference, now in its fifth year, is held.
• 2012: Matador launches dedicated ebook publishing and distribution services.
• 2015: Indie-Go, an online author services portal, is launched.
• 2015: The Book Guild Ltd is acquired and moved to Troubador’s Leicester offices.
• 2015: MDM distribution launches – offering distribution and marketing services for any self- publishing author.
• 2016: Troubador celebrates reaching 20 years in business. 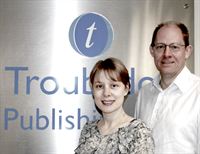