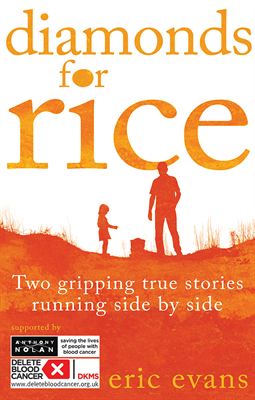 ­­Eric stood next to the terrorist who bombed Orly Airport, survived interrogations in war-torn Liberia and bought his way out of that brutal civil war with a bag of rice.

Now Eric is sharing his story with the world and urging potential bone marrow donors to join his ‘Donors are Diamonds’ campaign. After six extraordinary decades, Eric lay in hospital with his life hanging in the balance when he decided that he must complete his book. But how would he be able to explain his incredible story and life-changing medical experiences? The only way was a unique format where Eric’s two stories run side by side. As he undergoes his treatment he links, chapter by chapter, to his dramatic real-life adventures.

The result is Diamonds for Rice. It is an astonishing true story covering the North Sea oil boom; the carnage in Africa; a worldwide search for a donor; two bone marrow transplants and a friendship, born out of the ultimate act of selflessness. Published by Troubador, the memoir has taken Eric over a decade to write – and he will donate 30% of the proceeds to blood cancer charities Anthony Nolan and Delete Blood Cancer UK.

Eric left college at seventeen, profited from the North Sea Oil industry and became a millionaire at the age of twenty-eight. Life was good for the young businessman who owned a mansion, a fleet of luxury cars, two aircraft and a top nightclub. He took over a logging company in Liberia – but the country erupted into civil war. Diamonds, provided by little children, gave him a means of escape. He paid for those diamonds with bags of rice. But even though he escaped with his life that day, there were more traumas to come...

Eric, who is currently promoting Diamonds for Rice with an extensive UK media campaign, is available for interview and willing to speak candidly and freely about all of the challenges he's faced. Review copies of his amazing autobiography are available on request from Troubador.