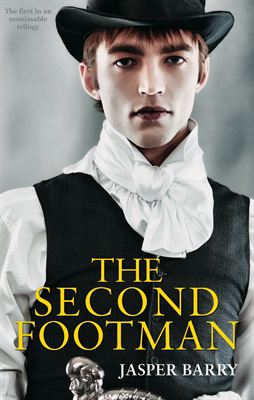 The Second Footman is a story of burgeoning homosexuality between an impossibly beautiful, but ruthless and enigmatic footman, and a shy but ferociously intelligent marquis. It's been re-designed and released in WHSmith travel stores across the country

After brokering a deal with WHSmiths to place copies of The Second Footman by Jasper Barry in travel stores across the coutnry, Matador have re-designed the novel – first published in 2013 – and re-released it.

The Second Footman features protagonist Max, the duchesse de Claireville's second footman. At the age of nineteen, Max does not intend to endure the indignities of service for long. He has a plan – to find an aristocratic patron who will become his unwitting accomplice in an audacious fraud.

It is true that in 1880s' France, despite nearly a century of revolution and social turmoil, the aristocracy is still firmly entrenched in privilege, and the gulf between the salon and the servants' hall is as wide as ever. But Max is handsome, quick to learn and confident of his abilities as a seducer of both men and women. Whether ladling soup beneath crystal chandeliers, or reading biographies of the great generals in his squalid footman's dormitory, he sees himself as the man of the future – ruthless, above morality and sentimental attachments.

Yet, when he at last acquires his patron­ – The Marquis de Miremont – a shy man, uncomfortable in society despite his distinguished lineage, unfashionably preoccupied with honour, integrity and truth, Max finds himself ambushed by longings for friendship and affection that threaten his grand plan. Max suddenly finds that obeying his own ruthless code is not so easy either...

Jasper Barry’s story of burgeoning homosexuality between an impossibly beautiful, but ruthless and enigmatic footman, and a shy but ferociously intelligent marquis, perfectly conveys the complexities of a passionate affair that breaks the rules of both the elite and the downtrodden.

The Second Footman has already garnered plenty of praise from readers, including the following comments:

“The best find in gay literature in quite some time.”

“Beautifully written, this is a touching, sensitive and intriguing love story.”

“Engaging, thought provoking and moving... A gay story with a modern day resonance.”

Review copies of the re-released historical novel are currently available from Matador on request.