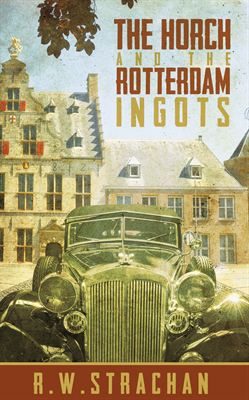 The Horch and the Rotterdam Ingots is a gripping Second World War timeslip novel, featuring a classic car and four Wehrmacht officers

The Horch and the Rotterdam Ingots flits between the Second World War and the present day. In May 1940, four senior Wehrmacht officers are charged with the removal of over four thousand gold ingots from a bank in Rotterdam. Together they conspire to embezzle forty ingots for their own use, to be hidden away in a Swiss safety deposit box until after the war. However, ten of the ingots fail to make it to their hidden destination, but instead are concealed in the hollow chassis legs of a German army Horch staff car.

Some seventy years later, Calum Breffit, a young English oil executive, finds himself stranded in Azerbaijan after his car breaks down. With the help of the Zitov family he begins to restore his vehicle, but later discovers an abandoned Horch in their cow barn. As he also begins to rebuild the Horch, he also begins to uncover its sinister backstory…

R. W. Strachan has served as a police officer in the cities of Glasgow, Brighton and Aberdeen. During his career he was a detective in the CID and regional crime squad. He was also an armed guard at a prime minister’s residence in East Sussex. He lives in Aberdeenshire. Mr Strachan is available for interview, and review copies of The Horch and the Rotterdam Ingots are available on request.