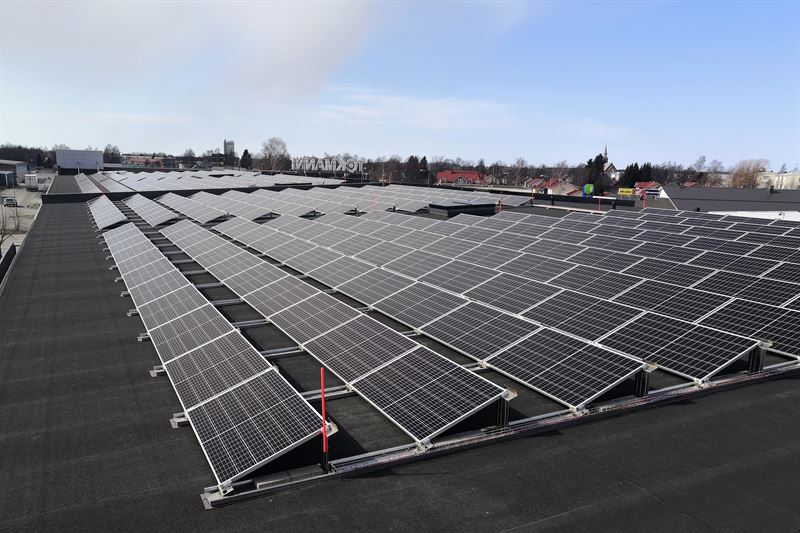 In April this year, Tokmanni completed the installation of a solar power plant with 480 solar panels on the roof of its store in Raahe. The plant’s total output is 160.8 kWp. Photo: Solarigo

Tokmanni, the largest general discount retailer in Finland, has grown into one of the largest producers of solar energy in the Finnish retail sector, relative to the number of its stores. The current year has been the most significant in the history of Tokmanni’s solar energy production.

Since the installation 367 solar panels on the roof of Tokmanni’s store in Jämsä in September 2016, Tokmanni has added more than 18,000 new panels to its capacity in the past four years. Last year, new solar power plants were introduced at 20 Tokmanni stores. The pace of installation has remained brisk, with panels having already been installed at ten Tokmanni stores this year. The number will grow further before the end of the year, as the Tokmanni stores in Nivala and Aura, as well as the store under construction in Pietarsaari, will have solar panels installed.

Tokmanni currently has 35 solar power plants with a total of about 18,700 solar panels. By the end of the year, there will be about 19,400 solar panels installed at 38 Tokmanni locations. Tokmanni’s partner in these projects is Solarigo, a Finnish company that invests in solar plants and delivers them to us based on Tokmanni’s orders.

“We have increased the number of our solar power plants seven-fold in the past two years. Once the rest of the solar power plants planned for this year are commissioned, they will generate about 4,650 megawatt-hours (MWh) of renewable solar energy for Tokmanni every year,” says Harri Koponen, Tokmanni’s Store Network and Concept Director. 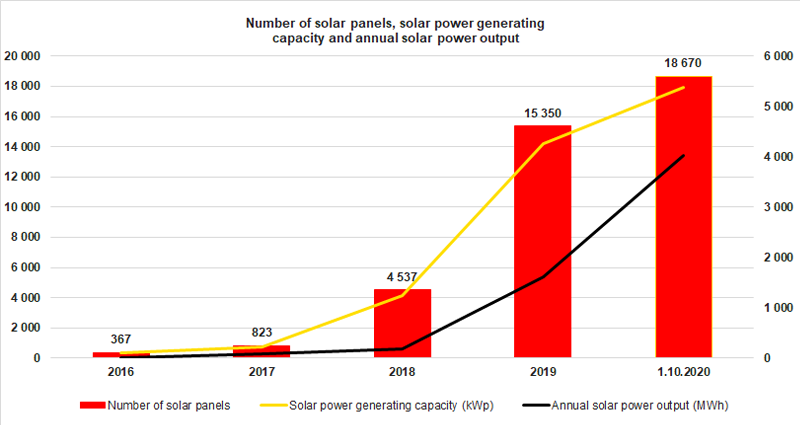 Tokmanni’s investments in solar power are evident, for example, in this graph illustrating the number of solar panels, the solar power generating capacity and the annual solar power output.


Solar power is used particularly for lighting, ventilation and cooling
– Summer months are clearly a time of peak output

At Tokmanni, most of the electricity is consumed by lighting, ventilation and cooling. Solar power generated on the roofs of its locations is ideal for Tokmanni because the highest amount of electricity is generated at times when consumption is highest.

“During the sunny summer months, we can generate on average half of the electricity consumed in a Tokmanni store with our own solar power, even though refrigeration and cooling equipment, in particular, consume a lot of electricity during the same period,” Koponen says.

“Last June, for example, was wonderfully sunny. In that month, we generated as much as 44% of total electricity consumption at the Tokmanni locations that had solar panels installed on their roof,” he adds.

In relative terms, one of the largest producers of solar power is the Tokmanni store in Hämeenkyrö, which produced enough solar energy to cover up to 69.8% of its total electricity consumption last June. The Hämeenkyrö store was followed by the Tokmanni stores in Uusikaupunki and Tammisaari, where solar power accounted for 65.7% and 65.5%, respectively, of electricity consumed in June.

At Tokmanni’s Administration and Logistics Centre in Mäntsälä, about a third of electricity consumed came from self-produced solar power, and the rest was purchased renewable electricity. Solar power accounted for about 11.5% of Tokmanni’s estimated overall consumption in June.

On an annual level, the solar power generated by a solar power plant can cover about 15–20% of the electricity needs of a Tokmanni store.


Approximately 5.9 GWh of solar power has already been generated on the roofs of Tokmanni locations
– The output can be compared to the mileage driven by an electric car, for example

Tokmanni has produced solar energy for its own use for approximately four years now. Over this period, the solar power plants on the roofs of Tokmanni locations have produced about 5.9 GWh¹) of renewable energy. This corresponds to the annual electricity consumption of around 2,950 small apartments or approximately 29.5 million kilometres driven by an electric car²).

The contribution of self-produced solar power to Tokmanni’s total electricity consumption is estimated to increase this year to as much as 6.4%³). This is a significant increase, as last year the corresponding figure was around 2.4%⁴). 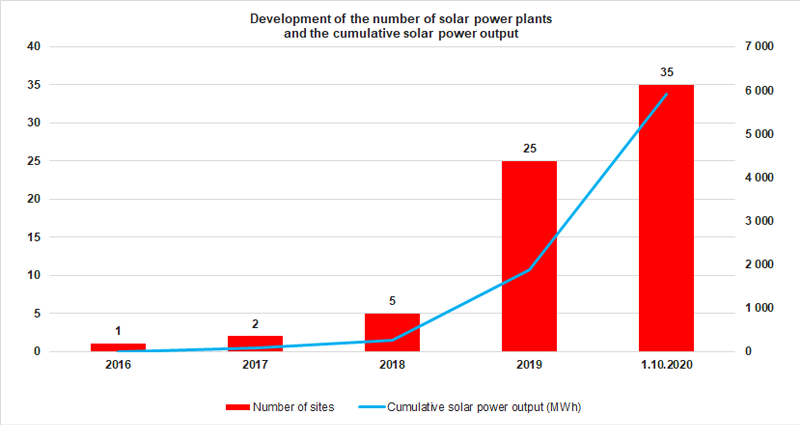 The number of solar power plants and the cumulative solar power output have clearly increased during the past two years.

With solar power, Tokmanni reduced its CO₂ emissions between September 2016 and September 2020 by about 832 tCO₂⁵). Once all the power plants, i.e. the 35 that are already installed on roofs and the three new plants that are planned, are in use, they will reduce emissions by about 658 tCO₂ annually⁶).

“We focus a lot of attention on smart energy choices and particularly reducing the carbon dioxide emissions of our stores. We are investing strongly in solar power and, for example, LED lighting, in addition to which all the electricity we purchase is 100% renewable,” Koponen says. 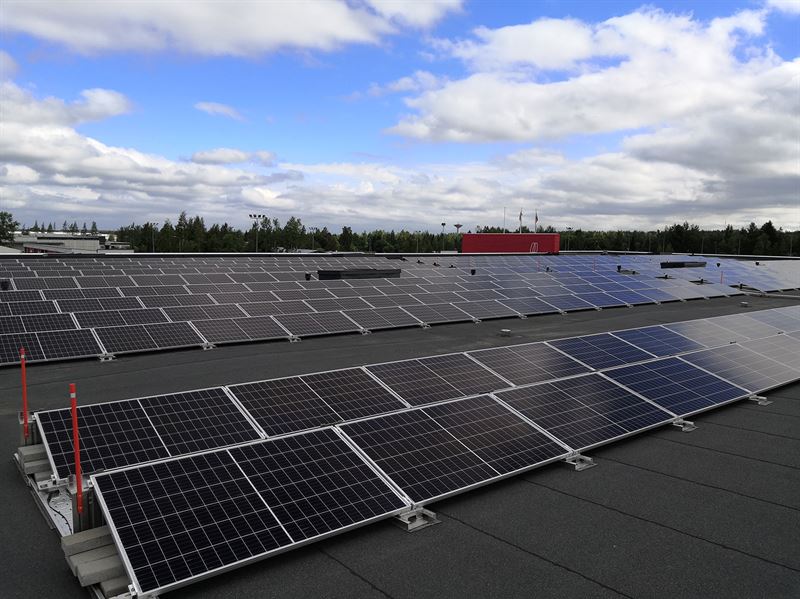 The Tokmanni store in Päivölä, Seinäjoki also produces solar power. The solar power plant on the roof of the store has 440 solar panels and an output of 147.4 kWp. Photo: Solarigo

As a sign of its genuine desire to continue its work in mitigating climate change, Tokmanni joined other global pioneers in adopting climate targets that are officially approved by the Science Based Targets initiative (SBTi) earlier this year. With these targets, which are based on the Paris Agreement, Tokmanni will support the Business Ambition for 1.5 °C campaign and commit to doing its part to limit global temperature rise to 1.5 degrees Celsius.

Tokmanni commits to reduce absolute scope 1 and 2 GHG emissions by 70% by 2025 from a 2015 base year. Additionally, Tokmanni commits that 80% of its suppliers by spend covering purchased Goods and Services, will have science-based targets by 2025.

“The commitment is significant, as the 1.5°C target is the most ambitious in the Science Based Targets initiative. By signing up to the initiative Tokmanni ensures that its emissions reduction targets are aligned with climate research and form a sufficient contribution towards limiting global warming to 1.5 degrees Celsius,” says Emilia Koski, Tokmanni’s Head of Corporate Responsibility.


The following Tokmanni locations already have a solar power plant:


A solar power plant is planned for these Tokmanni sites, among others:

⁵) Tokmanni’s emissions reduction of 832,000 kgCO₂ achieved with solar power is based on measured output data for the period of September 2016–May 2020. The CO₂ emission coefficient in Finland for average electricity generation (calculated as the average of the emission factors calculated using the benefit-sharing method for three statistical years [2016, 2017 and 2018]. The emission coefficient takes into account only domestic energy production, i.e. purchased electricity is not included) is 141 kgCO₂/MWh. The value of the average emissions coefficient was updated on 12 May 2020.

⁶) The estimated emissions reduction is based on the estimated annual output of the planned solar power plants. The CO₂ emission coefficient in Finland for average electricity generation (calculated as the average of the emission factors calculated using the benefit-sharing method for three statistical years [2016, 2017 and 2018]. The emission coefficient takes into account only domestic energy production, i.e. purchased electricity is not included) is 141 kgCO₂/MWh. The value of the average emissions coefficient was updated on 12 May 2020.


Tokmanni is Finland’s leading general discount retailer. Some 3,700 Tokmanni employees make customers’ everyday life and special occasions easier by offering a versatile and up-to-date assortment of Finnish and international brand-name products and other high-quality products at prices that are always affordable. With nearly 200 stores around Finland and an online store, Tokmanni is always close to its customers. Tokmanni’s revenue in 2019 amounted to EUR 944.3 million. Tokmanni’s shares are listed on Nasdaq Helsinki.