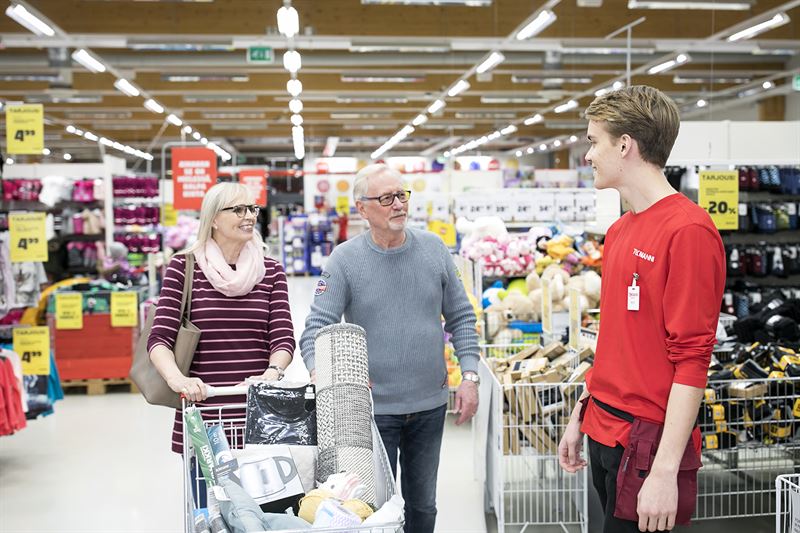 Tokmanni will open a new store in Hanko on Thursday 25 April 2019 at 10 a.m. The store is located close to the main road into the town and will replace the two Tokmanni stores that have served customers in separate locations for many years and which will be closed on Wednesday 24 April 2019. The opening of the new store, which will be much more modern and pleasant than the earlier stores and will have a larger selection, will be celebrated in the Tokmanni way with both special offers and surprise buckets containing product gifts.

In the renewed store, Tokmanni will offer a comprehensive range of products, from beauty, health and wellbeing products to home decoration, cleaning and home renovation products. The selection also includes clothes and accessories, dry foodstuffs and leisure, home electronics and entertainment goods. The store has a separate garden department that sells yard and garden products such as tools and plants according to season, and propane canisters.

The store’s general visual appearance will combine Tokmanni’s red brand colour and modern white-grey tones. Shopping will be easier thanks to wider aisles and improved signage. In addition, energy-efficient LED technology will be used in the store’s lighting. A pleasant shopping experience will be boosted by Veikkaus gaming services, a recycling point for small electronics and a Posti Parcel Point. As at other Tokmanni stores, items bought in the discount chain’s online shop can be picked up from the Hanko store.

What is special about the new store for Tokmanni’s customers is that it offers the entire selection that used to be divided between two stores in a single location.

“Thanks to our new store, we can offer the entire versatile selection of goods under the same roof, which naturally is a significant improvement in our customers’ shopping experience and makes our employees’ work easier. The new store is not only centrally located, it is also pleasantly modern, well-lit and spacious,” says Mathias Kivikoski, Tokmanni’s Sales and Marketing Director, who will be present at the opening.

From the opening day on Thursday until Sunday, the new Tokmanni will be full of special offers. And as usual at Tokmanni openings, 1,000 free buckets filled with product gifts will be handed out to the first customers during the opening morning.

Tokmanni’s chain will continue to grow and renew

Tokmanni’s target is to increase its store chain to more than 200 stores and to add a net of 12,000 square metres of new retail space every year, which means around five new or relocated stores. At the time of the opening of the Hanko store, Tokmanni will have 188 stores around Finland.

The first half of this year will be very busy for Tokmanni because, in addition to Hanko, the discount chain will also move to new premises in Juuka. In addition, before the end of April, Tokmanni will open the eight Ale-Makasiini chain stores it acquired late last year under the Tokmanni chain brand. Of the old Ale-Makasiini stores, the stores in Pielavesi and Suolahti will celebrate their openings on the same day as in Hanko. In the near future, also during the first half of this year, the TEX chain store Kemijärvi and the Säästökuoppa chain store in Sodankylä, now owned by Tokmanni, will also be opened under the Tokmanni brand.

Earlier in the spring, Tokmanni opened a former TEX chain store under the Tokmanni brand in the centre of Rovaniemi, a renewed store in Kehräämöntie in Kajaani, a renewed and expanded store in Turenki and a new store in Tesoma, Tampere. In addition, in mid-March Tokmanni centralised all of its store operations in Siilinjärvi into the Tokmanni store that has been in operation in the town for a long time by closing the Ale-Makasiini located in other premises nearby.

During the autumn, Tokmanni will expand its store network to two new locations, Vääksy and Virrat.¹)

Tokmanni is Finland’s leading discount retailer chain. Some 3,600 Tokmanni employees make customers’ everyday life and special occasions easier by offering a versatile and up-to-date assortment of Finnish and international brand-name products and other high-quality products at prices that are always affordable. With nearly 200 stores around Finland and an online store, Tokmanni is always close to its customers. Tokmanni’s revenue in 2018 amounted to EUR 870.4 million. Tokmanni’s shares are listed on Nasdaq Helsinki.