Award-winning Bosch Car Service garage, D&D Autos, has shown its support to BEN, making a significant donation following an auction at an event hosted by the automotive charity.

Having attended the annual event, Matthew Pestridge of D&D Autos decided to dig deep and back the charity by bidding on – and ultimately winning – a Suzuki motorcycle listed as a key lot at the evening’s auction. Having now taken delivery of the GSX-R600 bike, the garage has finalised its donation to BEN, totalling a figure in the region of £11,000.

“As a garage we have long been aware of BEN, but this is definitely our biggest involvement with the charity to date,” said Matthew Pestridge Director at D&D Autos. “I attended the awards as part of the Bosch Car Service Forum, and having seen the great work the charity does I decided to get involved and support what is a very worthy cause.”

The donation follows what has been a busy period for the garage, a highlight of which was being named as Business of the Year in the 2015 Kent Invicta Chamber Awards. As a well-known employer of apprentices and shirt sponsor of local football team, Ashford United FC, the garage is an active member of its community.

Provided to BEN for the auction by Suzuki, the GSX-R600 has a lightweight chassis featuring a compact wheelbase and race-developed suspension. It was developed to celebrate the manufacturer competing in the premier class of racing, and delivers a real-world demonstration of Suzuki’s race-proven technology.

D&D Autos of Orbital Park, Ashford, is a member of the Bosch Car Service national network of garages, comprising of 500 members in the UK and Ireland, a Bosch programme to provide motorists with a high quality and technically competent alternative to main dealer car servicing and repair, for all vehicle makes and models. All Bosch Car Service garages work to a Code of Practice approved by the Trading Standards Institute.

Customers interested in booking an appointment with D&D Autos should contact the team on 01233 504765, or visit www.ddautosashford.co.uk 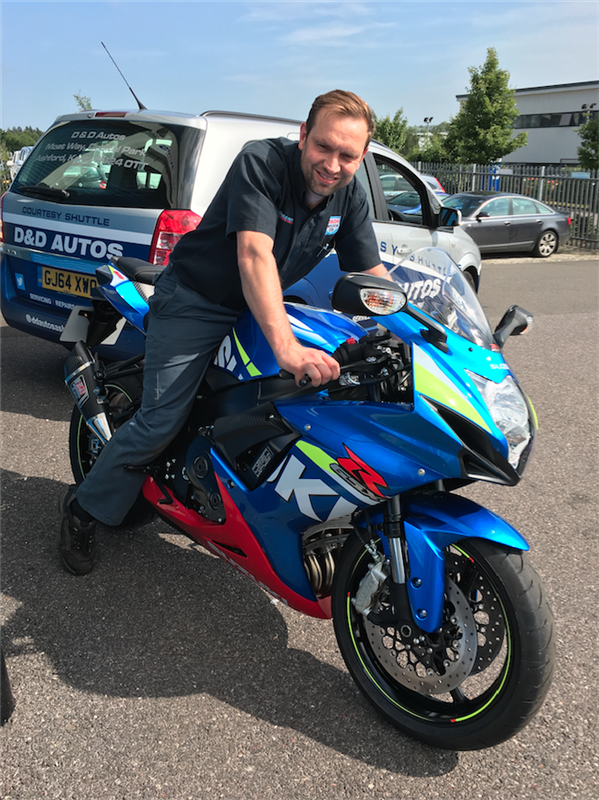 Above: Matthew Pestridge of D&D Autos with the bike

The Bosch Group is a leading global supplier of technology and services. Its roughly 360,000 associates worldwide (as per April 1, 2015) generated preliminary sales of 48.9 billion euros in 2014.* The company’s operations are divided into four business sectors: Mobility Solutions, Industrial Technology, Consumer Goods, and Energy and Building Technology. The Bosch Group comprises Robert Bosch GmbH and its roughly 440 subsidiary and regional companies in some 60 countries. Including its sales and service partners, Bosch is represented in roughly 150 countries. This worldwide development, manufacturing, and sales network is the foundation for further growth. In 2014, Bosch applied for some 4,600 patents worldwide. The Bosch Group’s strategic objective is to create solutions for a connected life. Bosch improves quality of life worldwide with products and services that are innovative and spark enthusiasm. In short, Bosch creates technology that is “Invented for life.”

*The preliminary sales figure disclosed for 2014 does not include the former joint ventures BSH Bosch und Siemens Hausgeräte GmbH (now BSH Hausgeräte GmbH) and ZF Lenksysteme GmbH (now Robert Bosch Automotive Steering GmbH), which have since been taken over completely.